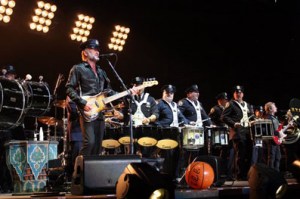 New York public TV tapped into the final date on the Police reunion tour at Madison Square Garden in a unique fund-raising effort that may serve as a template for stations seeking to broaden PBS' demographics through live music.

About one-third of the tickets for the Police finale were offered as "rewards" for donations to New York public TV sister stations WNET and WLlW, launching their Public Television Rocks marketing initiative and raising some $3 million in funds for the networks.

Coleman says the way tickets were distributed opened up a "new paradigm" that could be used again. About two-thirds of the tickets were sold through Ticketmaster (which donated much of its service charges to Police charities), and one-third of the house was distributed over the air and online to serve as rewards for New York PBS pledges.

The first row alone generated $140,000 via an online auction, which Coleman thinks might be the highest-grossing first row for a concert.

WNET deputy general counsel of program business affairs Ranfi Rivera says the stations wanted to connect with potential donors beyond just over the airwaves. "We put our thinking caps on to come up with other ways that we could draw attention to what we were doing, to reach people who ordinarily don't seek us out," Rivera says. "One of the ways we were able to reach folks was to launch a twowave eBay auction."

In the first wave, front-row seats averaged about $4,200 each as a donation to New York public TV, with such perks as a band meet-and-greet and sound check rounding out the "experience" package. "It's a contribution and obviously people get tax benefits from that, but it was a nice package for a Police fan and it also supported a great cause," Coleman says. Beyond the auction, other price points for pledges ranged from $750 to $100 per pair of tickets for donations.

The second wave, launched after the concert, was an eBay auction of signed Police instruments that raised another $50,000. Throughout the promotion, the two stations served up plenty of Police content on the air.

"It worked, it was great, and it gave [the stations] an outreach to a whole new audience," Coleman says.

"I'm talking to them now about lots of new opportunities for next year. Rather than do this once in a great while, what we can do is take this platform and use it in a way that will engage younger viewers with continuity."

Rivera says the success of the Police promotion will be followed by more music events as part of the stations' Public Television Rocks campaign, though details have not yet been finalized.

Coleman points out that with a dearth of broadcast TV opportunities for live music, bands are seeking TV exposure. "Public television is a fabulous outlet for this," he says. "They are very interested in reaching out to this audience who loves music and would love to see it without commercial interruption.

I believe public television is going to become a very attractive place and as this continues, they'll do more and more music. What needs to be done is figure out the economic model of how to fund it, and that's what I've been working on."

The Reunion Tour may be over, but we're happy to announce a new tool to help you relive some of the moments from the road. With The Police TV, you can enjoy all kinds of videos from the tour vault, including footage of great performances, candid backstage moments with the band, plus clips from Tokyo to the finale in New York City and everywhere between. We will add a different clip to The Police TV each week so check back often!

The numbers, even without the context of touring economics or music history, are pretty staggering: $358,825,665 gross, 3,300,912 tickets sold. The tour most thought would never happen ended up logging 146 headlining shows, plus appearances at five festivals...