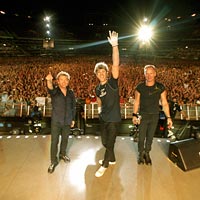 The numbers, even without the context of touring economics or music history, are pretty staggering: $358,825,665 gross, 3,300,912 tickets sold. The tour most thought would never happen ended up logging 146 headlining shows, plus appearances at five festivals.

The Police reunion tour hit the finish line Aug. 7 at Madison Square Garden in New York as a phenomenal triumph. The $358 million mark makes the 16-month outing the third highest-grossing tour of all time, following the Rolling Stones' 2005-07 Bigger Bang tour ($558 million) and U2's 2005-07 Vertigo tour ($389 million), and ahead of the Stones' 1994-95 Voodoo Lounge tour ($320 million), according to Billboard Boxscore.

The tour was produced by Live Nation global touring chairman Arthur Fogel and RZO Productions partner Bill Zysblat. Calling from the Garden just prior to that final show, Fogel shared his thoughts on the final Police action from Sting, Stewart Copeland and Andy Summer. "It's somewhat surreal," he said. "It's hard to believe 16 months have blown past this quickly."

Fogel is no stranger to global megatours, having produced the last several Madonna and U2 treks (and their next ones) and cutting his teeth with Michael Cohl on Stones extravaganzas dating back to 1989.

But the Police tour ranks high in Fogel's portfolio. "I have a tremendous sense of pride and accomplishment on this one," he said. "Clearly, they're one of the biggest bands of all time, and this tour has just proven how strong an act they are around the world. They weren't together that long, and so much time has passed, yet the music has endured."

When Sting announced, "We're the Police and we're back," from the Staples Center stage at the 2007 Grammy Awards in Los Angeles, he heralded a tour that had long been a dream for music fans and the concert industry alike.

In terms of its setup, launch and execution, the Police trek was an exercise in strategic routing and flexibility. After leaping from the gates May 28, 2007, in Vancouver, the tour played arenas; legendary outdoor venues like Fenway Park in Boston and Churchill Downs in Lexington, Ky.; key festivals like Bonnaroo in Manchester, Tenn., and the Virgin Mobile Fest in Baltimore; and stadiums worldwide, including in the United Kingdom, Mexico, South America and Japan. As a victory lap, the Police made a run through North American amphitheaters with Elvis Costello.

"Rarely do you say, 'I think it's as it should have been,' as opposed to, 'I should have done it this or that way,'" Fogel said. "I really feel that it played out perfectly."

The buzz around this one was as big as any in recent memory. A post Grammys press event at the Whisky A Go Go in West Hollywood, Calif., at which the band showcased its remarkable onstage alchemy with live performances of several songs, stoked the flames. "And to keep that kind of momentum going for 16 months is a challenge, but clearly a sense of urgency kicked in for people after the first go-round that this would be the last," Fogel said.

As a trio, with relatively spare production and no backup singers, horns, strings or sidemen, Fogel imagined that for the band "it was tough after so many years putting the parts back together... but they absolutely evolved into a pretty seamless music machine."

While numbers like these would probably be enough to coax almost any band into reuniting, the prevailing consensus is that it's highly doubtful these guys will launch another tour, given a variety of factors, not the least of which is Sting's success as a solo touring artist. Another set here and there at a global event like Live Aid? Maybe.

Meanwhile, the Police reunion knocks off one of the "big three" reunion tours that fans are most clamoring for, the other two being Pink Floyd (most meaningfully with Roger Waters) and Led Zeppelin. Either could potentially happen, and more records would fall. And overall, reunion tours remain a solid bet, proved on a smaller scale by the New Kids on the Block reunion this year.

Nostalgia trumps plenty and, for many, legend trumps all. Bring on AC/DC.

Rock band The Police have performed the final concert of their reunion tour in New York's Madison Square Garden. In what is thought to have been their farewell show, frontman Sting thanked his bandmates for their "musicianship, companionship and understanding"...