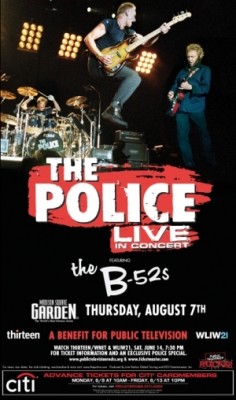 We are pleased to announce that The Police's final concert of their reunion tour will be held on August 7, 2008, at Madison Square Garden in New York. Proceeds from this event will benefit Thirteen/WNET and WLIW21 New York's public television stations, producers of arts programming seen all across America and the Public Television Rocks! Initiative.

Tune in to Thirteen/WNET and WLIW21 on Saturday, June 14th at 7:30 PM ET and again on WLIW21 at 9 p.m. to see "The Police: Public Television Rocks!", a celebration of one of rock's greatest bands featuring classic Police concert footage and interviews.

The Police's final concert of their reunion tour will also feature special guests the B-52's.

Visit ThePolice.com News section to read the full press release.
Thirteen/WNET and WLIW21 have made sure The Police fan club has the opportunity to join public television supporters at this special show. Advance access for fan club members is explained below.

Ticket prices will range from $79.50 to $379.50. All current Premium and Legacy members, regardless of whether they have utilized their fan club ticket allocation already, will be able to participate in this ticketing event. Members who have already received a ticket passcode will be able to access another passcode during the advance ticket access window for this show.

Tickets will be available to the general public via the Ticketmaster site starting on Saturday Jun 14 at 7:30 pm.

For more information on how to access advance tickets please visit tickets.thepolice.com/ page.

May 26, 2008
Flying Padovanis - London/Paris dates in June...
The Flying Padovanis have several gigs lined up in London and Paris during the week of The Police's Hyde Park performance including a free show at the Ace café in Wembley. This is a great place to see a full show by the Flying Padovanis ahead of their appearance supporting The Police in Hyde Park on 29 June. (Please note the show in Paris at Le Reservoir is also free!)...
Read more
+

German fans will have their last chance to see the Police on June 28th when the band performs in Leipzig. The venue will move to Messehalle 1 which will give fans a chance to see The Police perform indoors for the final German event...