The following article by James Collard appeared in a May 2013 issue of The Daily Telegraph...

I enter the fort through ancient doors guarded by tribesmen standing beside camels and move into a dimly lit courtyard where candles flicker in stone niches. A band of musicians strikes up a song - of war, women, welcome? Who knows, but it is stirring stuff.

Then, together with other guests, I begin a slow procession through this ancient fort, pausing occasionally to catch my breath or stare at some marvel: a tribeswoman dancing with cooking pans on her head; the tracery of stone purdah screens lit from within, or a face in the glitzy crowd, gathered at an elegant bar set up on top of the ramparts, where I sip champagne and watch troupes of folk dancers from across India - followed by fireworks over the twinkling lights of Jodhpur below us. One couple in particular stand out: Sting, the Tyneside-born rock star and activist, and his film-producer wife, Trudie Styler; he in jodhpurs, she in a magnificent sari.

To find the Grammy-award-winning singer in Jodhpur's Mehrangarh Fort is not entirely surprising. It is no secret that over the years Sting and Trudie have been fascinated by all things Indian - from Hinduism and sitar music to yoga and tantric sex. Sting himself has been coming here for more than three decades, sometimes to celebrate New Year in Goa, sometimes to camp in the Thar Desert outside Jaisalmer, sometimes to join pilgrims visiting the holy headwaters of the Yumuna and Ganges rivers. On occasion he has even brought his two children. "I've been lucky enough to share it with my family, and now my children love it as much as I do," he says.

This time Sting has come on the invitation of his friend, The Maharaja of Jodhpur, His Highness Gaj Singh II (affectionately known as Bapji) to attend the first Jodhpur One World Retreat to raise funds for the Indian Head Injury Foundation.

This is something of a personal crusade as in 2005, Bapji's son and heir, Yuvraj Shivraj Singh, sustained a serious head injury playing polo in Jaipur, from which he is thankfully recovering. But recognising that not everyone in India is as lucky as the Maharaja's son or has access to the best doctors, the Retreat - held in three spectacular settings over as many days - was Bapji's way of raising both safety awareness and also funds to improve medical facilities for people with brain traumas.

His method? An ambitious, American-style charity fundraiser, with Sting as the headline attraction, along with an auction of princely treasures, and a Davos-style gathering of "thought leaders" that takes place the day after that opening bash in the fort, in the grounds of the Maharaja's lakeside palace hotel, Bal Samand.

It's all in a good cause. "A person dies on India's roads every six minutes or so, India is the brain injury capital of the world", says Sting. He explains that while in the US one in 200 might die from a head injury, in India that is one in six - "including a dear friend of mine, who was killed in a motorcycle accident here only last month". Bapji's invitation to help raise awareness was not something to refuse.

"I've been coming to India for almost half of my life", says Sting. "I think it's essential for any traveller here to acknowledge its contradictions, its paradoxes: the abject poverty and the extraordinary wealth; the exquisite beauty of its spiritual traditions beside the horror of its religious hatreds; the patient good humour of its people and the Kafkaesque entanglements of bureaucracy. I've seen many sides of this country."

Which is Sting's most memorable experience, I ask? "Riding a Royal Enfield across the deserts of Rajasthan was definitely one of my favourite journeys," he says. "Pretty special too was bathing in the waters beneath the glacier at the source of the Ganga (Ganges) in the Himalayas. It is meant to purify the soul but it took more than one glacial immersion in my case," he jokes.

More recently Sting accompanied the family of late Ravi Shankar to commit the sitar player's ashes to the sacred waters of the Ganges in the holy city of Varanasi, and describes the riverside ghats, flights of steps leading down to the river, as "a fine place in which to contemplate mortality".

Sting's first visit to India was also for a performance - back in 1980, when Sting was still the lead singer of Police, and Mumbai was still Bombay. His gig there was, by his own description, the best performance of his life thus far, and also the beginning of his lifelong fascination with the Subcontinent. Back then he'd asked the whole audience of 15,000, "a cross-section of Indian life", to dance to the music, rather than just politely applaud. "So all the old ladies in their saris got up on their seats with their umbrellas and started to dance - and in the end we had a stage invasion."

His gig at the close of day two of the Retreat is a much smaller affair: an after-dinner performance in the gardens of the vast and splendid Umaid Bhawan palace, solely for the 250 guests who have flown in from across India and around the world for this very moment. Sting is "just happy to be able to help out in some way."

At the start he asks people to dance, and as he sings 'Desert Rose', 'Shape of My Heart' and 'De Do Do Do Do, De Da Da Da' - songs which made his voice part of the soundtrack of the Eighties and Nineties - the well-heeled crowd are more than happy to oblige. On the dance floor there are Indian royals (plus one of our own, Prince Andrew, looking rather less exotic in a lounge suit), representatives of the newer Indian dynasties such as Ambanis and the Mittals, sporting hero Sachin Tendulkar, as well as a sprinkling of Bollywood beauties of both genders. There's even a stage invasion, albeit an especially genteel one, just like back in 1980, to Sting's obvious delight. "I love this place!", he says to the crowd. "Thank you for making me feel so at home."

It is easy to see why the singer is so enamoured of the Blue City (Jaipur is the Pink City), so called because of the deep, almost-Mexican blue with which the Brahmins here paint their houses. The fort is extensive, rambling across its hilltop site. Founded in the 16th century, and added to by each generation of Bapji's ancestors, it contains a famed collection of what Sting describes as "little known musical instruments, which to me are fascinating".

Below the fort is the Old Town, with its narrow, shaded roads through which donkeys still carry heavy loads of building materials, firewood and produce from fields. For tourists there are textile shops such as the Maharanis and Baba Arts Emporium - perfect for Trudie to buy fine silks, saris, and delicate pashminas embellished with delicate embroidery.

The place to stay - if you can afford the £500 price tag - is the monumental Thirties' Art Deco Umaid Bhawan (Bapji's palace home which he shares with a Taj hotel), where Sting stays, with its grandstand view across to Mehrangarh Fort. Just the thing for the Englishman who still "loves living in New York", and has homes in London, Wiltshire, Malibu and Tuscany - although he insists that while "I may travel a lot, I always be a Geordie!"

The country around Jodhpur is also well worth exploring (see panel, right) - from cosy rural retreats such as Lakshman Sagar or Mihir Garh - while a couple of hours' drive away is the Maharaja's splendidly restored fort at Nagaur.

If anything Nagaur is even more impressive than Mehrangarh, and another favourite venue for Sting and Trudie, who attended its Sufi Music Festival in February. They are the festival's patrons, endorsing the project with the familiar words: "We are spirits in a material world."

From Live Aid to tsunami relief and his work to save the rainforests of South America, Sting has an impressive record of activism and fundraising. So will Sting be back in Jodhpur for the next Retreat? "India is an intensely interesting country for me," he says, "culturally, historically, socially, spiritually - all of those things. So I'm always keen to come - particularly if it's to support a cause as worthy as this."

Comments
1
You must be a logged-in member to add comments. Log In | Subscribe
May 15, 2013 posted by nassrin
GREAT COUNTRY
WISH DEEPLY FROM MY HEART,NEXT YEAR " " THERE WON'T BE ANY POVERTY IN THIS PRECIOUS SPOT ON EARTH...IT'S EASY,IMPRESSED BY A TRUE STORY,HAPPENED IN INDIA,ALLOWS ME TO SAY:IT'S EASY" " WITH LOVE Nassrin Wahba
Newer comments    1 - 1 of 1    Older comments

May 14, 2013
Check Out The New Trailer For Documentary Film "Twenty Feet From Stardom!"
Millions know their voices, but few know their names. Check out the trailer for the compelling new film "Twenty Feet From Stardom" from award-winning director Morgan Neville, which shines a spotlight on the untold true stories of the backup singers behind some of the greatest musicians of the 21st century. Along with rare archival footage, "Twenty Feet From Stardom" includes interviews with Sting, Bruce Springsteen, Stevie Wonder, Mick Jagger, and many more, and features frequent Sting collaborators Lisa Fischer and Jo Lawry, among others. The film opens in the US on June 14. Please visit twentyfeetfromstardom.com or Facebook.com/twentyfeetfromstardom for additional details... 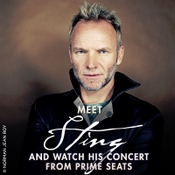