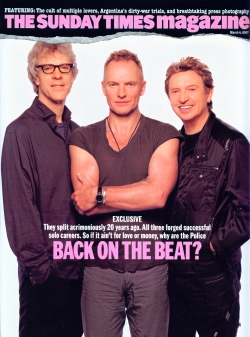 They said a reunion would be an act of insanity. So what changed their minds? Under intense interrogation, the Police break down and confess all. Interview by Chrissy Iley.

There is only a small industry crowd of 100 or so, gathered in the cavernous dome that is the Staples Center, LA, home to the Grammys. It's a technical run-through. It's boring. Beyoncé has an unfortunate fringe cut that is sucked into her mouth each time she sings the opening strain of Listen, her Dreamgirls anthem. The crowd stare glumly at the giant monitor and her giant flapping fringe.

Then there is the sound of a distinctive drumbeat. Perched behind the big drum kit is Stewart Copeland, last seen on TV in Britain as a gauche judge on the reality-TV show Just the Two of Us; last seen on stage properly with the Police over 20 years ago. You can discern concentration on his face. There's an intensity a long way from the languid arrogance of his TV persona. When Sting and Andy Summers come on, a wave of excitement erupts through the small crowd, which rises to its feet. Sting says: "It's been a long time. It's good to be back." There is a nervousness in the way he says it that draws you in.

They start to play 'Roxanne'. Sting struts, and you don't notice all those years that have passed. From a distance his hair is a halo of blond, his body lithe, his bottom high and round. He has the same slinky moves. The band is an odd-looking trio: Copeland tall, gangly, no bum at all; and Andy Summers, short, his face - once as pretty as a pussy cat's - impossibly young-looking for 64, a decade older than Sting. The music and its power are extraordinary. Whatever trauma they have inflicted on each other, the songs remain and they seem effortless, even affectionate with each other.

Backstage after rehearsal, everyone is excited. The band is jumpy, a box of playful puppies, though not from the same litter. Andy exhales: "Wasn't it great? Who'd believe that after all those years I just slipped back as if it was yesterday. It was really emotional." Sting looks at him and says: "You've got groceries on your mouth." Sheepishly, Summers wipes his lips clear of a large sandwich crumb.

Mar 3, 2007
Second Dallas show added - on sale now...
A second Police concert at the American Airlines Center in Dallas has been added on June 27 and already gone on sale via Ticketmaster...
Read more
+

Mar 3, 2007
'A Guide to Recognizing Your Saints' opens in the UK from March 2 and had its London premiere on March 1...
''We would love you to see our new film A GUIDE TO RECOGNIZING YOUR SAINTS starring Robert Downey Jr., Chazz Palminteri, Dianne Wiest, Shia LaBeouf, Channing Tatum and Rosario Dawson and directed by Dito Monteil. It has been garnering rave reviews as well as the Best Directing and Best Ensemble Cast Awards at this year's Sundance Film Festival and a Critic's Prize at the recent Venice Film Festival." - Trudie & Sting...
Read more
+