Today sees the launch of a ground-breaking social media campaign, 'I'm Gonna Be Your Friend' supported by many of the world's most famous names in entertainment and their fans. A global audience over 700 million Facebook and Twitter fans will be able to view a short film of the crisis in East Africa created by award-winning director Kevin MacDonald from footage of East Africa. The film is set to the 1973 Bob Marley & The Wailers song 'High Tide or Low Tide' and will reach over a billion people...

The campaign was developed to support Save the Children's appeal to raise funds for the devastating food crisis affecting millions of children and their families across East Africa.

It brings together the combined resources of Universal Music Group, Yahoo!, Facebook, AOL, MSN, YouTube, Twitter and others to give a potential global online reach in excess of a billion people. Many of these partners are showing the film and providing global editorial coverage, which will accompany the release of the downloadable track on the day of the launch.

With over 150 global stars already signed up and more joining by the hour, the combined total of their fans and followers on the social networks is over 700 hundred million people. This huge number will not only help raise awareness of the scale of the crisis but also vital funds for those suffering in the region.

The food crisis in Somalia and across East Africa is the worst in decades. 10 million people are affected ­ many have no food, no water and have lost all their livestock. One million children in Somalia alone face starvation if help is not delivered now. Save the Children and other aid agencies have launched a huge emergency response across the region and are on the ground delivering life-saving aid.

Helping raise funds for food, water and medicine for those in East Africa, the song and film can be downloaded through ITunes, from www.imgonnabeyourfriend.org or via Bob Marley's Facebook page www.facebook.com/bobmarley, for 99p / $1.29. The Facebook page will also feature click-through links for direct donations to Save the Children's East Africa appeal.

The single, 'High Tide or Low Tide' was specially chosen by the Marley family for the resonance of the single's lyrics, ''I'm Gonna Be Your Friend'', which form the title of the campaign and a message to be shared by friends across their social networks.

Justin Forsyth, CEO of Save the Children said, ''Save the Children, along with other aid agencies, are already supporting families with food, water and medicines. But the crisis is getting worse by the day and millions of children are facing starvation. We can stop this happening. But we need to act now. Every day counts. Please help us by downloading this powerful single and let's stop this catastrophe getting any worse.''
Comments
1
You must be a logged-in member to add comments. Log In | Subscribe
August 28, 2011 posted by Agus
Foods
Foods is Human based to live! Foods is for everybody!
Newer comments    1 - 1 of 1    Older comments

Aug 1, 2011
Sting returns to the Dominican Republic - new performance confirmed...
Sting will perform at the Altos de Chavón Amphitheater in La Romana, Dominican Republic on Sunday, September 4th, 2011. For this show, Sting will be accompanied by a 4-piece band featuring his longtime guitarist Dominic Miller, keyboardist David Sancious, drummer Vinnie Colaiuta and vocalist Jo Lawry. Fan Club sales for La Romana begin at 10AM (local time) on Thursday, August 4th. As tickets will simultaneously go on sale to the public, a number of tickets have been reserved exclusively for fan club members...
Read more
+ 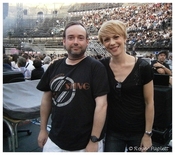 July is the usual time most British folk escape the rain of our homeland for the more summery climates of our European neighbours. Well, since I joined this leg of the tour in Mannheim the rain has been following me! Normally this isn't a problem; tonight I'm in a beautiful Roman Amphitheatre in Lyon, open to the elements. Sting had a quizzical expression and meaning on his face singing out "it's a big enough umbrella..." lyric, on 'Every Little Thing She Does Is Magic' tonight's opener (and not 'Faith' as earlier in the tour) that I wondered whether he had been caught in the torrential downpour we had experienced walking to the venue?