Every breath you take - Sting helps shine a light on a silent killer...

Every breath you take - shining a light on a silent killer

A thought-provoking new stop smoking campaign is today unveiled by Fresh with support from the British Lung Foundation to highlight a cruel, lingering disease that destroys the lungs.

'Every breath' aims to highlight the long-term effects of smoking-related chronic obstructive pulmonary disease (COPD), the umbrella term for emphysema and chronic bronchitis, in a bid to encourage more people to quit smoking.

Despite the largest drop in smoking in England, the North East still has the worst rate of COPD in the country. Around 8,700 people were diagnosed with the condition in 2008-09, but it is estimated that around 32,000 more people in the North East have the disease but have never been diagnosed.

With permission from Sting to use his lyrics, 'Every breath' aims to show how COPD is a progressive disease and challenges the assumption among most smokers that being short of breath is normal.

A survey of smokers in the North East found that 67% weren't even aware of COPD or the debilitating effect on people's lives.

Ailsa Rutter, director of Fresh, said: "The North East has the highest rate of COPD in the whole of England. COPD stops people from being able to breathe properly – they feel like they are suffocating.

This campaign is a UK first - the North East is the first region in the whole of the country to use COPD in a stop smoking campaign - and the fact that we are leading the way on this is certainly something to be proud of.

"We want people in the North East to be the best informed in the country about the health harms of smoking. We hope that with 'Every breath', we are able to provide the hard facts about the terrible effects of COPD and further encourage more people to quit smoking as early as possible to prevent it.”

COPD is the UK's fifth biggest killer, killing more people than breast, bowel or prostate cancer every year. Eighty per cent of cases are caused by smoking and the symptoms of COPD are often presumed to be the 'normal' side effects of being a smoker - i.e. breathlessness and a 'smoker's cough'. Because it is a disease which affects breathing, it is the second biggest cause of emergency admissions to hospital and costs the NHS an estimated £491m every year.

Dr Chris Stenton, Consultant Respiratory Physician with Northumbria Healthcare NHS Trust, based at the Royal Victoria Hospital, said: "COPD is a disease mainly caused by smoking. Unfortunately it is a disease many smokers don't know much about until they are diagnosed. It can be a cruel disease but its worst ravages can be prevented by quitting smoking early enough. More awareness and education can only be a good thing.

"A person with COPD will experience a much more rapid and severe decline in the function of their lungs, which will make daily life seem a struggle. Tasks that they previously took for granted such as walking upstairs, washing or shopping become tremendously hard work.

"For anyone who smokes, is in their mid to late 30s or older and is experiencing shortness of breath it is likely they are experiencing COPD in the early stages. At that point it is vital to stop smoking now before things get worse.

"Many COPD patients do find stopping smoking and treatment can really help their quality of life, but unfortunately we do not have any treatments that stop COPD getting worse or reverse the damage already sustained. The only way to stop the deterioration in lung function is to stop smoking."

As well as a team of medical experts throughout the region, FRESH has partnered with the British Lung Foundation to help raise awareness of COPD.

Bev Wears, Support and Development Manager at the British Lung Foundation North of England, said: "We are delighted to back this campaign as we are all too aware of the damage that COPD causes both physically and emotionally. Many people with COPD tell us they wish they had known more about the disease and its links to smoking when they were younger. The British Lung Foundation is extremely pleased that FRESH is helping to highlight the facts.”

'Every breath' also has the backing of musician Sting, who is originally from the North East. Sting said: "Many people across the UK are affected by lung damage and other smoking related illnesses, particularly in the North East where I grew up. I'm pleased to support a programme which works towards giving people the motivation and support they need to quit."

Ailsa Rutter continued: "FRESH is extremely grateful to Sting for giving permission for his lyrics to be used in support of our campaign, to the British Lung Foundation, medical experts across the North East and to real people who live with the horrible effects of COPD every day for stepping forward to help highlight the long-term effects in a bid to encourage other smokers to quit before it's too late.

"Quitting smoking is the best thing anyone can do for their health and people in their 30s and 40s mustn't ignore the early warning signs of COPD, such as breathlessness. Anyone who would like to quit smoking should contact the NHS Smokefree Helpline on 0800 011612, or text FRESH and their postcode to 88088, they can also visit http://www.freshne.com/everybreath/ or make an appointment to see their GP."
Comments
4
You must be a logged-in member to add comments. Log In | Subscribe
October 09, 2011 posted by andy
"and costs the NHS an estimated £491m ev
Why should the hard earned taxes of sensible healthy people be used to treat irresponsible people who electively decide to ruin their health by inhaling smoke into their bodies. Smokers should be made to take out private health insurance to pay for their inevitable treatment.
October 09, 2011 posted by tommie
Gracias
Sting: Bravo, again... To offer your song and stature to raise awareness of another great cause -- with little, if any, personal gain... Besides, my mom has this disorder -- this is a chance for us to mutually appreciate you and your kind heart. Thanks, dude, for doing it again, adding to the list of all your great contributions to the world. Fondly, Tom and me mum
October 08, 2011 posted by surpata
As a Health Teacher to 12 year olds...
I always discuss the terrible risks and guaranteed diseases that will ultimately suffer from if they choose to smoke. Thanks Sting for driving the message home, too.
October 08, 2011 posted by lilybright
Silent killer
I am a specialist in pulmonology and I am very very proud for this,thank you Sting !! Many copd patients notice their symptoms much too late so it is extremely important to share the knowledge to young people to avoid starting smoking and to smoking people to quit and search for help and early diagnosis Lilybright
Newer comments    1 - 4 of 4    Older comments

Oct 6, 2011
Back To Bass Tour - Two Performances in New York City confirmed...
Two concerts in New York City have just been added to Sting's Back to Bass tour at the Roseland Ballroom on November 8 and 9. With the announcement of these two performances, the itinerary for Sting's Back to Bass tour 2011 is now complete. The fan club presale will begin at 10AM (local time) tomorrow, Friday, October 7. Legacy Fan Club members will be given a one hour advance window at the start of the presale, after which the pre-sale will open up to all members beginning at 11AM (local time). We have reserved a number of tickets exclusively for Sting.com members located within all sections of the Roseland Ballroom, including the Side Floor area. Each member may purchase up to two tickets to each performance. Tickets will go on sale to the public on Friday, October 14 at 10AM (local time). Please note, all tickets are General Admission...
Read more
+ 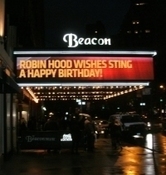 Oct 5, 2011
Sting concert takes your breath away...
The biggest names in music celebrated the singer’s 60th on Saturday night, watched by Des O’Mahony. He looks an exceptionally young 60. No doubt the result of a gruelling personal work schedule and his infamous yoga obsession. Sting is a driven, focused workaholic, continually pushing himself workwise and artistically. He has never been the critics’ favourite; most are happier to dwell on his private life and personality traits rather than evaluate the music. As Springsteen commented on stage on Saturday: "It’s funny, anytime I read about him I never recognise the guy I know"...
Read more
+