New Performances In Europe Confirmed For This Summer...

Several new concerts are now confirmed for this summer in Europe! Sting will perform at the Helsinki Classic Festival in Helsinki, Finland on June 16, at the Zagreb Arena in Zagreb, Croatia on June 27, at the Olympiski in Moscow, Russia on July 25, at the Arena Riga in Riga, Latvia on July 29 and at the Zalgirio Arena in Kaunus, Lithuania on July 31! For each performance, he will be joined by a 5-piece band including Dominic Miller (guitar), David Sancious (keyboards), Vinnie Colaiuta (drums), Peter Tickell (electric fiddle), and Jo Lawry (vocals).

Fan Club presale tickets for the Riga and Kaunus concerts are available NOW! Tickets will go on sale to the public Thursday, March 1 at 10AM (local time). 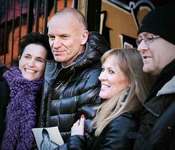 Feb 26, 2012
Sting Meets With Fans in Newcastle...
Video: Sting meets with artists and fans while back in Newcastle. In the latest Virtual Ticket video, Sting meets some fans in his hometown of Newcastle. Not a member of Sting.com? Click here to join and receive exclusive Virtual Ticket content, premium access to ticket pre-sales, t-shirt, members-only event opportunities, and more!
Read more
+

Feb 24, 2012
Four Concerts In Italy Confirmed This Summer...
Ciao Sting fans! We are pleased to announce that four concerts in Italy are now confirmed this summer. On July 10, Sting will perform at the Anfiteatro Camerini in Piazzola, on July 12 at the Molo del Porto in Molfetta, on July 13 at the Teatro Greco in Taormina and on July 15 at the Umbria Jazz Festival in Perugia! For each of these performances, Sting will be joined by a five-piece band including longtime guitarist Dominic Miller, Vinnia Colauita (drums), David Sancious (keyboards), Peter Tickell (electric fiddle) and Jo Lawry (vocals). Fan Club presales begin at 10AM (local time) tomorrow, February 25. Tickets will go on sale to the public Wednesday, February 29 at 10AM (local time)...
Read more
+