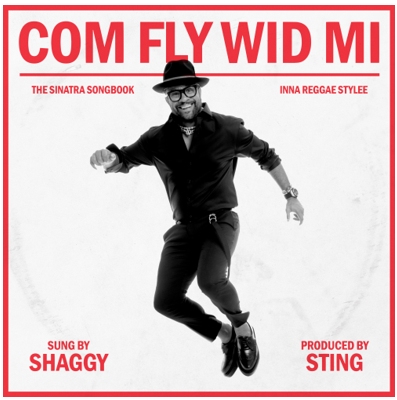 Following the Grammy Award for their collaborative album, 44/876, rock icon Sting and dancehall/reggae legend Shaggy have joined forces again for Com Fly Wid Mi. The new album, produced by 17-time Grammy Award winner Sting, features Shaggy singing the Sinatra songbook in a reggae style and will be released May 25 on all digital platforms.

In yet another surprising chapter in their already unexpected pairing, Com Fly Wid Mi was born out of a “crazy idea” Sting had while on tour with Shaggy a few years ago, as detailed here. The new album boasts reggae interpretations of some of ‘Ol’ Blue Eyes’ most beloved songs, kicking off with the uplifting ode to resilience “That’s Life,” followed by “Come Fly with Me.” The album also includes the sultry, “That Old Black Magic,” the metaphoric euphoria of being in love embodied on “Fly Me to the Moon,” and the misery of lost love on “Angel Eyes.” “Luck Be a Lady,” “Witchcraft,” and “Under My Skin,” among other fan favorites, are also featured with the album’s full track listing included below.

Sting explains, “This idea of getting my friend to sing ten iconic songs from the Frank Sinatra songbook in a reggae style had been brewing for a while…I know, it sounds crazy! But every time the idea crossed my mind, it made me smile. And what does the world need now, more than anything else…something to smile about!”

“I’ve always been a Sinatra fan,” says Shaggy. “As a child, Frank’s music was often playing in our house and on Sundays, all of the Jamaican radio stations would play the greats – Sinatra, Bing Crosby, Nat King Cole, et cetera.” He continues, “It’s great to be working with Sting again. He’s the brother I never knew I needed!”

Sting adds, “The reason reggae may work here is because there’s a joy and energy about it which is similar to the energy that Frank’s music had at its summit. You know the songs, you know the voice, you just never expected this. He’s not trying to be Frank, he’s Shaggy. So, relax and let that smile soothe the cares of the world away.”

To celebrate the album’s release, a special limited access, one night only performance will take place at the Blue Note Jazz Club in New York City on May 26. All details will soon be announced via Sting.com and on Shaggy’s social media platforms (Facebook: @Shaggy; Instagram, TikTok & Twitter: @direalshaggy)

Comments
2
You must be a logged-in member to add comments. Log In | Subscribe
May 01, 2022 posted by Natalia_z_kasetoyu
Thanks!
Just the titles themselves are promising! When a child, I used to listen to good jazz music (Frank Sinatra, too), and my first fantasy about reggae sound now was "Everybody Loves Somebody Somehow." Then, "Fly Me to the Moon" as performed by Paul Mauriat Orchestra. Then... Then I'm looking forward to listening to this album. It's believed to be a good antistress in today's realities of war. So thanks!
April 21, 2022 posted by goldenfields
Reggae Sinatra
Sounds like a lot of fun and good driving music as spring turns to summer.
Newer comments    1 - 2 of 2    Older comments

We are delighted to confirm a further date has been announced on the European My Songs tour this autumn, at the Royal Arena in Copenhagen, Denmark on 21 October 2022. Tickets will go on public sale on Friday, 27 May at 10am. The presale for Sting.com members will commence on Tuesday, 24 May at 10am and run until Friday, 27 May at 9am. (All times are local)...

May 19, 2022
Sting treats Nashvillle to Police favorites, solo hits and his own country classics...

A “Message In A Bottle” arrived on the banks of the Cumberland River Wednesday night. That was the Police classic Sting picked to open an eclectic evening at Nashville’s Ascend Amphitheater - as part of the Rock and Roll Hall of Famer’s “My Songs” tour. Donning leather pants, a T-shirt with the shortest sleeves modern science will allow, and a headset microphone (move over, Garth), Sting and his six-piece, multigenerational band weaved their way through a 22-song set...