Paul Simon and Sting at the Bell Centre...

There's really no obvious reason the Simon and Sumner partnership should have worked.

Unlike the highly logical tour teaming of, let's say, Elton John and Billy Joel, Paul Simon and Sting seem to share little in common. At least on paper.

Simon, 72, one of the rock era's most important singer-songwriters, had already recorded a virtually flawless oeuvre with Art Garfunkel and released most of his essential solo work before Sting, 10 years younger, entered our consciousness as a New Wave rocker with the Police in 1978. Little of the erstwhile Gordon Sumner's catalogue is what one might expect Simon to wrap his own poetic sensibilities around.

Nor was it easy to imagine much of an overlap between the fan bases of the two artists.

And sure enough, in their joint concert at the Bell Centre Friday night, some juxtapositions seemed uncomfortable, to be sure. Following up the epochal drama of Bridge Over Troubled Water with the stalker-rocker Every Breath You Take, for example, was undeniably jarring.

And yet such was the intensity of the mutual admiration society the two musicians seem to have formed that their two-hour-and-40-minute concert felt like it could go on all night - and that, indeed, it would and, most impressively, should. The sight of the two sharing a hug and some laughs at the end of the night (how often have you seen Paul do that with Artie in recent years?) spoke volumes.

While their respective latest albums - Simon's So Beautiful or So What (2011) and Sting's The Last Ship, from last year - rank among their strongest solo work, only one song from Simon's disc, Dazzling Blue, made the set list.

Instead, they focused on some of their most recognizable songs, with a few deep-catalogue delights, like Simon's Hearts and Bones and That Was Your Mother, added for good measure. While covering every key song by both performers would have kept the audience in the arena until about lunchtime Saturday, the insightfully-planned setlist managed to create the impression that little was missed.

It was a magical night, with virtually no missteps. The songs were beautifully chosen and performed, with help from an astonishing group of 14 musicians from both Simon's and Sting's bands, in various combinations. The exquisite chops demonstrated on stage helped drive the material home, while making it seem truly alive. There was no sense of the all-too-common and often forced jukebox fidelity one hears from so many veteran artists these days.

Sting faced the biggest challenge, having to blend his voice with Simon's and, in a couple of cases, make people forget the angelic beauty of Garfunkel's contribution to the original records. And while the quality of Sting's voice is very different from Garfunkel's, he managed to chart his own trajectory on the high harmony of The Boxer and walk away without a scratch from America - which he sang alone, with Simon off stage - and even the daunting Bridge.

On his own deliriously-received hits, like Roxanne, An Englishman In New York and Message in a Bottle, Sting proved himself to be in fine voice, hitting the high notes full on and gamely leading the crowd in the de rigueur “ee-yoh” singalongs.

All Simon had to do to leave the audience satisfied was pretty much show up. But he went the extra mile, stretching out on songs like the ever-irresistible You Can Call Me Al, a relentlessly building Graceland and the impossibly-joyous Diamonds On the Soles of Her Shoes.

On Me and Julio Down By the Schoolyard, the band swung like mad while Simon gestured wildly, shaking his hips and generally seeming to have a whale of a time. He even took the lead vocal on the Sting song Fragile, while the two traded verses - as they did several times during the evening - on Fields of Gold, which has a melancholic traditional-folk melody that suits Simon's voice perfectly.

When Simon released Still Crazy After All These Years, he was 34. Close to 40 years later, he still sings it, with more conviction added by all the extra years since then. But he's crazy like a fox - and the audience, who cheered the song's overall sentiment and sang along with palpable warmth, knows that. And they still love him for it.

For more reviews from the Montreal show please visit http://www.sting.com/tour/date/id/2907 where you can view the setlist, leave your comments about the show, post images of your ticket stub and your photos from the show! 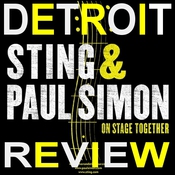 Feb 26, 2014
Sting and Simon Together perform transcendent music...
With Sting and Simon's joint On Stage Together tour at its halfway point, Paul Simon can see some discernible benefits to the collaboration. "We're becoming more like each other," he told the Wednesday night, Feb. 26, crowd at The Palace. "I personally feel I'll be more Adonislike (and will) be able to have sex for days at a time" - a reference to Sting's joking reputation for lengthy sessions of tantric amoré. Of course, Simon added, "I'm not sure I'm looking forward to that..."
Read more
+ 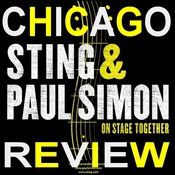 Here's something you don't see everyday: Sting deferring, complementing, and hanging back. It happened Tuesday at the United Center, with the former Police bassist handling his new role as sidekick to Paul Simon with what appeared to be genuine enthusiasm. Also just in: Sting can apparently take a joke. Simon - looking for all his frumpiness like he had just emerged from a long, lazy afternoon in his man cave - glanced over at the lean, black-clad Englishman and predicted that merely by basking in the younger singer's aura, he would emerge much more "Adonis-like" at the end of their tour with unrivaled sexual energy. Sting smirked, only to later praise the New Yorker as "one of my teachers and mentors" whose songwriting talents are "humbling and inspiring."