Paul Simon and Sting have spent a good part of the winter on stages together. By reputation, to find a roadshow packed with more ego you'd have to go back to, well, a Simon and Garfunkel tour.

But these two folk/pop/new-wave/world-beat legends, who have about 135 years and record sales in the hundreds of millions between them, checked their self-importance at the door at Strathmore Music Hall on Wednesday. Simon and Sting abbreviated and deviated from their standard act for charity, specifically to help raise funds for the Duke Ellington School of the Arts. The high-wattage bill in the ornate but intimate hall was supposed to pack even more power: An Ellington official announced from the stage just before showtime that Stevie Wonder, who was listed on the cover of the concert's program, backed out at the last minute because of a death in the family. The official said the event raised $1.2 million for the public school, a training ground for young entertainers and artists that opened in Georgetown in 1974.

On a typical show on this tour, Simon and Sting have shared the spotlight almost equally. But at Strathmore, Simon, now 72 1/2 years old, seemed quite comfortable letting Sting, 10 years his junior, dominate a set that lasted approximately 80 minutes, much of which Simon spent backstage. Ellington's orchestra and choir supplemented the headliners' regular touring quintet for most of the evening. Whenever Simon ambled out from the wings, Sting appeared happy just to be close to him. Both performers oozed genuine glee during an early-in-the-evening duet on Simon's "The Boxer."

But even when Simon wasn't standing beside him, Sting expressed reverence for his touring partner again and again. He called Simon a "mentor" before giving a Simon-less reprise of Simon and Garfunkel's 1968 gem "America." And while turning over the stage to Simon to sing Sting's "Fragile," Sting said that the tour rules allow him and Simon to "take ownership of each other's songs. "I think I got a better deal," Sting added. That's not a level of humility one would expect from a guy even Simon Cowell tagged as pompous.

The graciousness the professional performers showed to the kids sitting in with them added more sweetness to the proceedings. During a rocking version of the Police's "Every Breath You Take," Sting's guitarist, Dominic Miller, walked to the very back of the stage to coax a young shredder from the Ellington orchestra to join him up front.

And while Sting has been handling the harder vocal parts of "Bridge Over Troubled Water" all tour, on this night he and Simon stood together silently in front of the drum riser and let the Ellington choir wow the house with an a cappella but wholly electric take on the climactic verse, followed by an up-tempo, gospel-ish rewrite of the song's chorus.

"What are you guys doing tomorrow?" Sting asked his ad hoc amateur backups. None of the kids answered. Simon and Sting resume their tour Thursday at the Verizon Center. 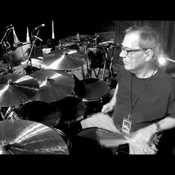 Less than a week to go on Sting & Paul Simon's On Stage Together tour! The latest video captured on the road features the "drummer's drummer," Vinnie Colaiuta. Check out a preview here and then login as a member for the full 4-minute video. 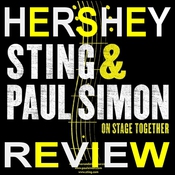 Mar 9, 2014
Sting, Paul Simon in fine voice for collaborative 'experiment' concert in Hershey...
If you entered the back of the Giant Center Sunday night, then listened and squinted toward the stage, you might have thought you'd been transported back to the 1960s. There's diminutive music icon Paul Simon, singing in harmony with a tall guy. But that taller guy is playing the bass. And his name is Sting. The two musical icons performed mostly separately, and momentarily together, during the Hershey stop on their minimalistically named the "On Stage Together" tour before a large and appreciative crowd. In that crowd, hands swayed, fannies shook and couples snuggled, ensconced in nostalgia that spanned two famous singer-songwriters' oeuvres from the '70s through the early years of the new millennium...
Read more
+