Sting And Trudie Styler To Be Honored By We Are Family Foundation...

The We Are Family Foundation (WAFF), a not-for-profit organization founded by legendary songwriter and producer, Nile Rodgers, will honor Humanitarian Award recipients Sting and Trudie Styler at its annual Celebration Gala, on Monday, October 29, 2012, at Manhattan Center's Hammerstein Ballroom in New York City.

Hosted by actress Rosie Perez and Touré, co-host of MSNBC's "The Cycle," the evening will include a concert featuring Sting, Nile Rodgers & CHIC and other special guests, to celebrate extraordinary global citizens who are dedicated to making the world a better place and who have helped WAFF make a positive impact on more than 15 million people worldwide.

Artist and activists Sting and Trudie Styler will receive the Humanitarian Award, which honors those in the public eye who have made tremendous efforts and inroads into improving the human condition throughout the world. Previous recipients of the Humanitarian Award include musical legends Jackson Browne, Peter Gabriel, Sir Elton John, and television and radio host Larry King.

Daniel Stern, founder of Reservoir Capital Group, will be honored with the Visionary Award for his local and global philanthropic contributions. Previous recipients of the Visionary Award include Tommy Hilfiger; Henry Juszkiewicz, CEO of Gibson Guitar and Susan and David Rockefeller Jr.

"The We Are Family Foundation was born as a result of 9/11, after which I asked the question, 'Can we organize for peace half as effectively as others do for hate?'" says Nile Rodgers, Founder & Chairman of the We Are Family Foundation. "My song, 'We Are Family,' was the inspiration to bring people together, celebrate our differences and share ideas across borders in order to solve some of the bigger problems facing our world. We are inspired by each of our honorees this year, as their dedication and passion to making the world a better place are their lifelong missions."

Tables of 10 for the 2012 Celebration Gala can be purchased in advance by contacting Michelle Posadas via phone at 212.397.4333 or email at contact@wearefamilyfoundation.org. To purchase individual tickets or to make a contribution to We Are Family Foundation, visit wearefamilyfoundation.org. Contributions are fully tax deductible to the extent allowed by law; the non-deductible portion of each ticket/person is $150. Arrivals and reception begin at 6:30 p.m. on Monday, October 29, 2012 followed by an awards ceremony, dinner and concert at 7:30 p.m. Manhattan Center's Hammerstein Ballroom is located at 311 West 34th Street in New York City.
Comments
0
You must be a logged-in member to add comments. Log In | Subscribe 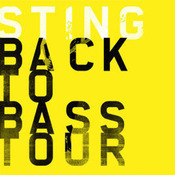 Oct 10, 2012
Sting: Back To Bass Fall Tour 2012 – Fan Club Presale For Bangkok Concert!
The Fan Club presales for Sting.com members will begin Friday, October 12 at 6AM (local time). Tickets for this performance will go on sale beginning Saturday, October 13 at 10AM (local time). The complete Back to Bass Fall Tour 2012 itinerary is now available on the tour page. Check it out and be sure to let us know in the comments which concert you're attending! If you are a member of Sting.com and would like to participate in the pre-sale, instructions will be located on the tour page...
Read more
+

Oct 10, 2012
Sting Picks Up Several Songwriting Awards at Annual BMI London Awards...
BMI celebrated the European and African songwriters, composers and music publishers behind the most-performed songs on U.S. radio and television on October 9 at its annual BMI London Awards. Also saluted were composers of the most-watched and highest-grossing television programs and films; and the legendary songwriters behind classics that have generated more than three million U.S. radio and television performances. With regard to this latter category, Sting picked up several songwriting awards as a number of classic songs passed notable landmarks. "De Do Do Do De Da Da Da", "If I Ever Lose My Faith In You", and "Message In A Bottle" each passed three million performances, "Don't Stand So Close To Me" passed five million performances, and "Every Breath You Take" passed an incredible eleven million performances!
Read more
+