Live Nation is pleased to announce that this fall, Sting will embark on the Back to Bass Tour throughout North America as he celebrates the 25th anniversary of his solo career by taking it back to bass… all the hits, stripped down, as they haven't been played in years. In support of his forthcoming box set collection Sting: 25 Years, slated for release on September 27, the tour features Sting backed by a 5-piece band in an intimate theatre setting.

Beginning in Boston on October 21 at The Wang Theatre at the Citi Performing Arts Center, the tour will extend across the US and Canada. Cities announced today include Philadelphia, Washington DC, Toronto, Chicago, Detroit, Miami, Dallas, Houston, Denver, Phoenix, Los Angeles, San Francisco, Seattle, and Vancouver. Additional dates will be announced in the coming weeks.

Back to Bass finds Sting performing songs spanning his dynamic and enduring solo career, from his 1985 debut The Dream Of The Blue Turtles to his latest release, Live in Berlin, plus a selection of The Police's greatest hits. Highlights include the Grammy winners "Brand New Day" and "If I Ever Lose My Faith In You" plus fan-favorites "Englishman In New York," "Desert Rose" and "Roxanne." Sting will be joined by a band including his longtime guitarist Dominic Miller, Rufus Miller (guitarist), Vinnie Colaiuta (drummer), Peter Tickell (electric fiddle), and Jo Lawry (vocalist).

To commemorate the 25th anniversary of Sting's solo career, the definitive box set Sting: 25 Years, will be released on September 27, 2011 and features three CDs and a previously unreleased live DVD, Rough, Raw & Unreleased: Live at Irving Plaza. The discs are housed in a hardcover book featuring rare photos, complete lyrics and newly written commentary by Sting.

In addition, Sting: The Best Of 25 Years, comprised of 12 remastered tracks including several remixes and newly unearthed live recordings, will be released on October 18, 2011.

Itinerary subject to change. Additional cities and venues to be confirmed. 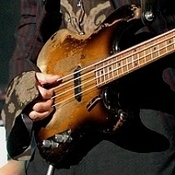 Sep 10, 2011
Sting.com 25 Years Countdown: 23 Days
What's your favorite memory of being at a Sting concert? Use the comments section below to let everyone know what your favourite memory from the Sting concerts you have attended is. How close were you? Was it a club, a theatre, an arena, an amphitheatre...? Did you meet or talk to Sting or any of the band? Did anything special happen - a marriage proposal or were you invited on stage to sing perhaps? Was a new song performed? Which tour was it? Don't spare any details - we want to hear all about it!
Read more
+