Sting Celebrates 30th Anniversary of The Soul Cages with Digital Only Expanded edition...

Expanded Edition Of The Critically Acclaimed 1991 Album From The Accomplished Multi-Instrumentalist/Songwriter Includes 13 Bonus Tracks, 7 of Them Previously Unavailable Digitally,

Originally released in January 1991, the Expanded Edition features the original nine-song Soul Cages album plus 13 bonus tracks that consist of remixes, extended mixes, and a pair of songs sung in Spanish and Italian incarnations. Seven of these bonus tracks have not been previously available for digital download or streaming. 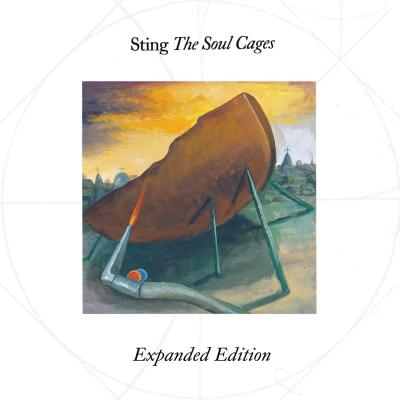 The core nine-track song cycle for The Soul Cages centers around Sting's deep sense of personal loss following his father's passing. The balance of the album's lyrical content embarks on a recurring seafaring motif in honor of his father's lifetime lamentation about never becoming a sailor, one of his unrealized personal dreams. The opening track, the slow-churning "Island Of Souls," follows a son's reverie about his fervent wish to take his shipbuilding father somewhere, anywhere out on the water in order to get away from it all, while "Why Should I Cry For You" chronicles the arc of the narrator's fragile inner resolve. The relatively jaunty nature of the hit single "All This Time" runs cleverly counter to its burial-at-sea narrative, as the majestic, moody album closer "When The Angels Fall" ruminates on Sting's staunch Catholic upbringing and the long-term effects of familial spiritual beliefs.

In fact, the ongoing impact of the deeply entrenched subject matter comprising The Soul Cages would remain with Sting, the artist for decades to come. Ultimately, it fueled him to author the music and lyrics for his first stage musical, The Last Ship, which debuted in 2014 and focused on the rise and fall of the shipbuilding industry in his native England.

Produced by Sting and Hugh Padgham, The Soul Cages also marked the first occasion that longtime stage and studio collaborator, the acclaimed guitarist Dominic Miller, appeared on one of Sting's albums. Other notable topline Soul Cages creative contributors include keyboardists David Sancious and the late Kenny Kirkland, saxophonist Branford Marsalis, and drummer Manu Katché. For his own part, Sting played bass, mandolin, and synthesizer on The Soul Cages, in addition to singing all of the album's lead vocals.

The Soul Cages has been certified platinum by the RIAA, and it topped the album charts in five countries, including the U.K. and Canada, topping out at No. 2 on the U.S. Billboard 200. The album's lead single, "All This Time," made a tremendous chart impact right out of the gate, ultimately reaching No. 5 on the U.S. Hot 100, No. 1 on both Mainstream Rock and Modern Rock, and No. 9 on Adult Contemporary. The title track, "The Soul Cages," won a Grammy for Best Rock Song in 1992, and it climbed to No. 7 on Mainstream Rock and No. 9 on Modern Rock. The album's other key singles were "Mad About You" and "Why Should I Cry For You."

Comments
8
You must be a logged-in member to add comments. Log In | Subscribe
January 24, 2021 posted by h00pak
Well done
Let me salute you for NOT releasing this on all the different media. How many CDs, vinyls, cases, sleeves, and liners have found their way to landfills, along the sides of roads, etc? I’m sure that you left quite a bit of money on the table, but it’s the right choice. If you believe that man is responsible for climate change, it’s only one step toward owning a commitment to protecting the world—the jets, tour trucks full of gear, and electricity used in every show also have to be reconsidered. I have no complaints with the tracks included—thank you for writing this music that I’ve loved for all this time.
January 17, 2021 posted by Varn
Thanks a lot
Thanks for releasing this in digital. I have seen some people unhappy, but I want to see this was a great gift to re-listen to a great piece of music
January 16, 2021 posted by JuliaCh
Unreleased songs
I was waiting for this special anniversary edition of The Soul Cages for a very long time. Sorry to say that I am disappointed, because I was waiting for the real unreleased songs. I'm still waiting for Cool breeze, Tide and Ocean waltz. These three songs are instrumental tracks and have appeared on the IMAX soundtrack The Living Sea, those songs are all written by Sting. Another song waiting for 30 years is Jeremiah Blues Part 2, does it exist? Anybody knows more about that?
January 16, 2021 posted by soulcage62
Physical edition please
Such a pity this is not a cd/box set, plus will the soul cages concerts ever get released on dvd/Blu ray
January 15, 2021 posted by Cristiu2
No cd part II
I specially subscribed to leave a comment to let know that it's absolute ridiculous to only release this digitally. It should be there with all those deluxe treatments from Prince, U2, etc etc. With photobook and cd/vinyls/dvd/bluray. This is such a disappointment for collectors... Streaming is ok and cheap, but I think there will be sold a lot physical material. It's also strange there hasn't been a Police deluxe release for each album... Strange kind of marketing.
January 15, 2021 posted by goldn__wire
Come Down In Time
'Come Down In Time' should have been included in "Duets" not here, because Elton John himself played the piano under the name Nancy Treadlight.
January 15, 2021 posted by Lukather
No cd?
Cd would be very welcome..as it's also not available on Itunes for download for my Ipod
January 15, 2021 posted by JohnBommarito
Digital only?
I guess I am the first, and not likely the last, to chime in. Digital only? Really? I would bet the average age of your fan base is of the demographic who still like physical media. Make a limited edition CD and I'm in. Others would be too I am sure.
Newer comments    1 - 8 of 8    Older comments

Sting, Stephen Curry, Eva Longoria, Camilo, Laura Pausini, Evaluna, Alejandro Sanz and Natalia Jimenez join the Inaugural Peave Honors. A select group of international personalities will join the inaugural International Peace Honors, presented by PeaceTech Lab, which will celebrate the most prominent world leaders and change-agents of our time, whose common goal is to build a more just and equitable future...

A 100 strong 'online choir' made up of Intensive Care Unit (ICU) staff, some from the North East, is releasing a song in a bid to reach Christmas number one. The ICU Liberty Singers are covering the Police track ‘Every Breath You Take’ to raise money to support the NHS staff who have worked on the frontline. The choir is made up of ICU staff, including nurses, doctors and health professionals who have been working on the frontline in the fight against coronavirus. The track is available to buy from today...