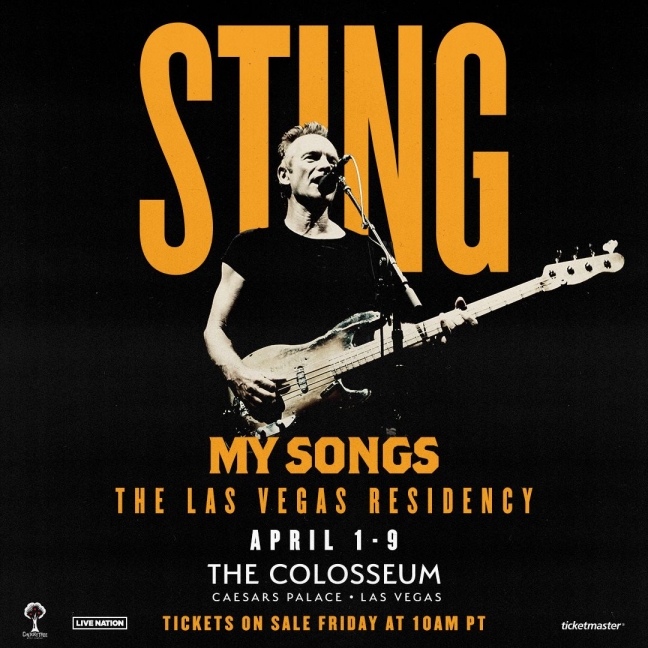 17-time GRAMMY Award winning musician Sting has extended his critically-acclaimed Las Vegas residency, “My Songs,” at The Colosseum at Caesars Palace with six new dates in April 2023. The shows will be held April 1, 2, 5, 7, 8 and 9, 2023.

Produced by the Cherrytree Music Company, Live Nation and Caesars Entertainment, “My Songs” presents a compendium of Sting’s most beloved songs with dynamic, visual references to some of his most iconic videos and inspirations. Throughout the show, the world-renowned musician treats fans to an array of greatest hits spanning his illustrious career, including “Roxanne,” “Message In A Bottle,” “Every Little Thing She Does Is Magic,” “Every Breath You Take” and several other fan favorites, plus new songs from his latest album, The Bridge.

Since premiering in October of 2021, “My Songs” has received rave reviews from critics and fans alike, including:

“…the perfect headlining concert show for this storied Vegas venue, a performance from an artist and band with absolute confidence and ability.” - LAS VEGAS SUN

“I think this is the beginning of an even longer visit. This is an absolutely remarkable show. When you sit there, you realize just how many fantastic songs he’s had.” - KTLA

“The show features many of his most memorable hits along with a few surprises.” - CNN

Tickets will go on sale to the public Friday, June 17 at 10am PT. Sting.com fan club members will have first access to a presale beginning Tuesday, June 14 at 10am PT through Thursday, June 16 at 10pm PT. (For more information, please visit https://www.sting.com/subscribe.)

Citi is the official card of Sting’s “My Songs” residency at The Colosseum at Caesars Palace. Citi cardmembers will have access to presale tickets beginning Tuesday, June 14 at 12pm PT until Thursday, June 16 at 10pm PT through the Citi Entertainment program. For complete presale details visit www.citientertainment.com.

In addition, Caesars Rewards members, Caesars Entertainment’s loyalty program, as well as Live Nation and Ticketmaster customers will have access to a presale running Wednesday, June 15 at 10am PT through Thursday, June 16 at 10pm PT.

Tickets can be purchased online at www.ticketmaster.com/stingvegas. VIP packages are also available, including a Stage Seating Experience, featuring immersive live audio from Mixhalo, as well as a Pre-Show VIP Onstage Experience, which includes a moderated Q&A with Sting and personal photo with him on stage. All shows begin at 8pm.

A limited number of tickets are available for this week’s previously announced performances:

We are delighted to confirm a further date has been announced on the European My Songs tour this autumn, at AFAS Live in Amsterdam on 17 November 2022. Tickets will go on public sale on Friday, 10 June at 11am. The presale for Sting.com members will commence on Wednesday, 8 June at 10am and run until Thursday, 9 June at 5pm. (All times are local).

We are delighted to confirm a further date has been announced on the European My Songs tour this autumn, at Helsinki Ice Hall in Finland on 22 September 2022. Tickets will go on public sale on Friday, 10 June at 10am. The presale for Sting.com members will commence on Tuesday, 7 June at 10am and run until Wednesday, 8 June at 5pm. (All times are local).