Sting: My Songs - Antoine Elie and Tom Leeb will join Sting when he returns to France this fall with his My Songs concert...

Cherrytree Management and Live Nation announced that special guests – Antoine Elie and Tom Leeb - will join Sting when he returns to France this fall with his My Songs concert. 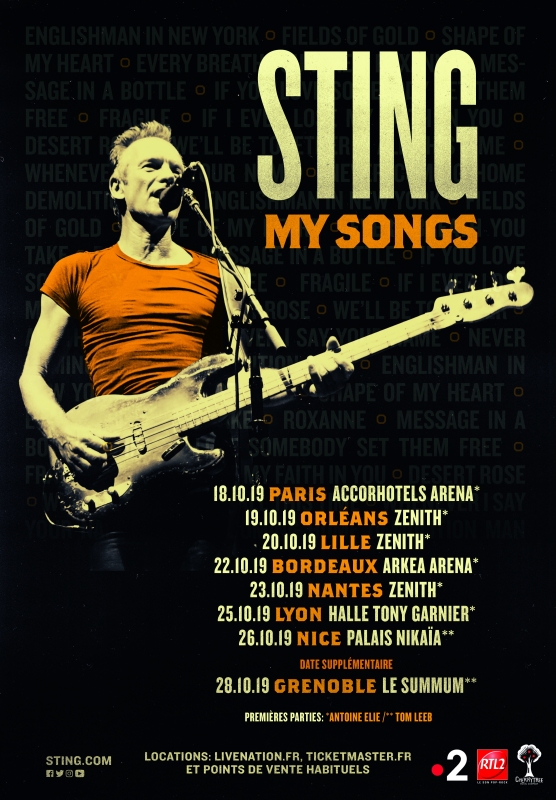 CherryTree Management & Hard Rock Live have confirmed that “Sting: My Songs” will be presented at Hard Rock Live at Seminole Hard Rock Hotel & Casino Hollywood on Saturday, November 9, at 8pm. Tickets go on sale Friday, July 26, at 10am. Members of Sting’s Fan Club will have the opportunity to access presale tickets prior to the general public by visiting www.sting.com beginning Tuesday, July 23 at 10am...

Sting’s acclaimed musical, THE LAST SHIP, starring and featuring original music and lyrics by multiple Grammy Award®-winner Sting, will add three new cities as part of its international tour.  After premiering in Los Angeles at Center Theatre Group’s Ahmanson Theatre and then playing at SHN’s Golden Gate Theatre in San Francisco, THE LAST SHIP will have engagements in Washington D.C. at the National Theatre; St. Paul, MN at the Ordway and Detroit, MI at the Detroit Opera House. Sting will star as shipyard foreman, “Jackie White,” and will perform the role at every performance. Additional cities and casting be announced at a later date...