Sting performs in Moscow for a second time this tour...

Sting managed to cross rock with the classical.

The singer sang his own biggest hits and those of The Police with classical musicians. And he did it perfectly.

This tour has stopped here in the city for the second time. Sting is touring with a program of symphonic treatments that, of course, is an order of magnitude more difficult. The first concert he gave at the Crocus City Hall last autumn left a positive feeling, and it was very interesting to see what has changed in the show nine months later.

This time the British singer is touring ''light'' - instead of the Royal Philharmonic Concert Orchestra, led by Steven Mercurio, the conductor travelling with him is Sarah Hicks, an American of Japanese-Hawaiian descent, who had previously worked with Chris Botti. In addition, the singer is accompanied by four permanent band members - guitarist Dominic Miller, percussionist Rhani Krija, vocalist Jo Lawry and bassist Ira Coleman. The concerts involve local musicians who are learning their parts in in advance in readiness for the arrival of the singer. In Russia it is the Russian National Orchestra under Mikhail Pletnev.

Sting's ''Symphonicity'' tour shows are a beautifully conceived and organized mechanism. Each evening he repeats almost the same set from city to city. And you know exactly that the fourth item to be played will be 'Roxanne', while the seventh will be 'Russians'. But this is done on a high note with mastery and positivity and and the audience are happy. While in Moscow, there was evidence of tiredness amongst the musicians. Long-time Sting - guitarist/vocalist Dominic Miller, with whom he has performed more than a thousand times, and recorded most of his albums seemed a little lost during the execution of the internationally acclaimed 'Fragile'. And Sarah Hicks complained in her twitter that touring is composed of repetitive scenes: airplane-hotel-concert. However, having arrived in the Russian capital the day before the show in the Olimpiski she relaxed a little. ''In Moscow, day off! Swim, steam, sauna, vodka!'' says her twitter, which does not require translation.

The difference between the autumn and the latest concert was significant. Our musicians sounded richer and more colorful - though maybe the Olimpiski simply performed better than the Crocus. Not a very bright full of autumn shock 'Next To You' and designed a blood-red light 'Russians' steel pikes program. Note that these things were probably the most independent and powerful orchestration. But warmly greeted 'Field of Gold', 'Shape of My Heart', 'Englishman In New York' were designed to sound slightly different from the originals that have been performed many times.

'Moon Over Bourbon Street' proved excellent as a stylish, vampire horror story. Last autumn the song was accompanied by images of the shadow of a creeping Dracula. At the Olimpiski the screens were used to broadcast the concert with many close-ups - hands of musicians, serious faces, the light falling on the soloists such as the first violinist Jana Gerasimova makes the arena motionless. Performing with such a program for Orchestra - the first experience, and indeed, in Russia with orchestras such a level rockers have not yet played.

The concert came to a close with the monumental oriental 'Desert Rose', the rock'n'roll of 'She's Too Good For Me', and then the emotional 'Fragile'. As is his tradition, Sting finished the show alone, solo with guitar, but this time he sang 'Message in a Bottle', the only song in the set that he did not perform in the fall.

Sting has worked long and hard to earn the credibility of a serious performer, close to the classic tradition. With that, his voice stronger and more pleasant, but to put it mildly, not a classic. However, the singer accurately and unobtrusively accents, experimenting with pleasure, perfectly verifies trivia and looks convincing in all compositions. Professionalism and charismatic, with an inner peace and ability to to manage the audience - the idol of millions has found a happy balance.

© Izvestia (translated with the aid of Google) 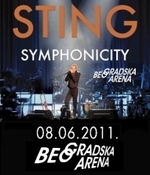 In Belgrade on Wednesday evening, British musician Sting was in fine voice as he performed orchestral interpretations of his greatest hits, accompanied by the Serbian orchestra "Kamerata Serbika ', in front of more than 10,000 people. Sting and ''Kamerata Serbika'', conducted by Sarah Hicks, played effectively for about two hours - with a break of 20 minutes - and the crowd cheered throughout as an inspired Sting performed songs from his time with The Police and from his solo career...