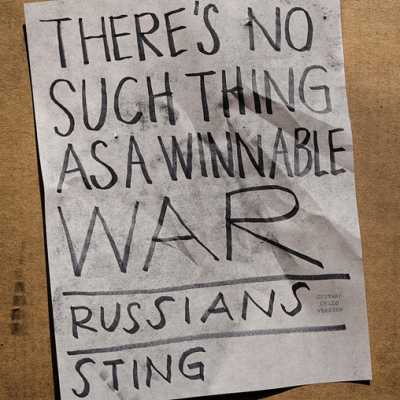 Today, Sting - singer/songwriter, musician, activist and humanitarian - releases “Russians (Guitar/Cello Version)” to all digital platforms with net profits to benefit www.helpukraine.center – a volunteer storage center established by Ukrainian business owners where humanitarian and medical aid can be sent from all over the world - with funds being processed through the German charity foundation, Ernst Prost, People for Peace – Peace for People.

Amid the ongoing Russian invasion of Ukraine, Sting decided to unearth his 1985 song, “Russians,” which was inspired by the Cold War and originally appeared on his debut solo album (The Dream of the Blue Turtles).

Sting comments, “I’ve only rarely sung this song in the many years since it was written, because I never thought it would be relevant again. But, in the light of one man’s bloody and woefully misguided decision to invade a peaceful, unthreatening neighbor, the song is, once again, a plea for our common humanity. For the brave Ukrainians fighting against this brutal tyranny and also the many Russians who are protesting this outrage despite the threat of arrest and imprisonment - We, all of us, love our children. Stop the war.”

Accompanied by cellist, Ramiro Belgardt with Sting on vocals and guitar, the new rendition, “Russians (Guitar/Cello Version),” was produced by Martin Kierszenbaum, engineered by Kaleb Allen, mixed by Robert “Hitmixer” Orton and mastered by Gene Grimaldi at Oasis Mastering.

Comments
1
You must be a logged-in member to add comments. Log In | Subscribe
March 25, 2022 posted by Natalia_z_kasetoyu
Thanks!
For Mr. Sting - that was quite unexpected but very pleasant experience to hear Russians as the starting song for the concert. I would like to tell you all our gratitude!
Newer comments    1 - 1 of 1    Older comments

We are delighted to confirm three additional shows on Sting's My Songs tour in France this autumn on 5, 7 and 11 October with shows in Reims, Montpellier and Paris respectively. The Sting.com presale for these shows will commence on Tuesday 22 March at 10am CET through to Thursday, 24 March at 5pm CET. Tickets go on public sale on Friday, 25 March at 10am CET. For 2022 dates confirmed so far visit www.sting.com/tour.

Multi-platinum singer, song-writer and actor, Sting returns to BBC Radio 4 audio drama in I Must Have Loved You, a play he has co-created with writer Michael Chaplin. The story follows Jess Doyle [Fran McNamee], a young singer compelled to leave Newcastle, to escape an overbearing blues singing father [Sting] and to find her own voice. Yet somewhere inside Fran knows that success may be the unmaking of her and all of those who love her. Listen now here...