Sting rocks the crowd at the Edinburgh Playhouse... 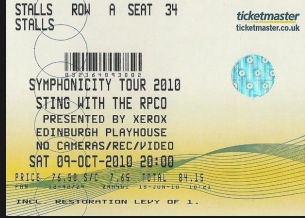 Sting has been touring the world with his 78-stop 'Symphonicity' tour. His show at the Edinburgh Playhouse in Scotland was the 61st performance and the crowd were blown away.

I wouldn't really call myself a Sting fan - but then I've never heard him play quite like this. The 58-year-old's familiar rock-based guitar riffs were replaced by the gentler tones of oboes, violins and cellos for a show that reinvented his classic tunes.

For his epic tour Sting has recruited London's 45-piece Royal Philharmonic Orchestra under the enthusiastic and entertaining direction of conductor Steven Mercurio. Sting's gravelly vocals blended perfectly with the power of the orchestra.

This was the 61st performance of this 78-stop 'Symphonicity' tour - a name that plays on The Police's Grammy-award winning final album 'Synchronicity'. But there was no sense of tour-fatigue with the mostly aged 35-plus crowd given full value for money by a three hour performance that included no fewer than three encores.

The first half alone featured 14 songs starting with three of Sting's biggest hits - 'Faith', 'Every Little Thing She Does Is Magic' and 'Englishman in New York'. That trio was quickly followed by the best version of 'Roxanne' I've heard - an arrangement that fully exploited the orchestra's string section, particularly the cellos.

Sting was supported throughout by his long-time guitarist Dominic Miller and the Australian jazz singer Jo Lowry, showcased best by 'Whenever I Say Your Name'. Elsewhere, there was the beautifully melancholic 'Fields of Gold' before 'Next to You' had the front rows on their feet - until the slightly overzealous security staff intervened.

The second half featured fewer big hits, but was no less enjoyable. Songs played were 'This Cowboy Song', 'The End of the Game' and the trumpet-fuelled 'All Without Envy'.

As the show drew to a close there were hugely enjoyable versions of The Police hits 'Every Breath You Take' and 'King of Pain'. Both of them were obvious crowd-pleasers.

This was a performance peppered with brief but illuminating back-stories for a number of the songs, giving the show an autobiographical, almost farewell feel. On the strength of this fantastic performance, it's surely anything but.