Sting and actor Jimmy Nail performed songs from "The Last Ship" at the Broadway Playhouse at Water Tower Place in Chicago Friday. The two were promoting Sting's album of the same name and the fact that Chicago will host the pre-Broadway world premiere of "The Last Ship" at the Bank of America Theatre from June 10 to July 13, 2014.

But on Friday, Sting played the comparatively tiny Broadway Playhouse at Water Tower Place for an exclusive hourlong concert and chat session to promote his forthcoming Broadway musical "The Last Ship," which will make its pre-Broadway world premiere run in Chicago starting June 10 at the Bank of America Theatre.

The audience of media types and group ticket buyers were treated to Sting performing new songs like "Dead Man's Boots," "What Say You, Meg?" and the musical's title song, also the name of Sting's latest album.

"The songs actually represent the end of a very long drought for me. I haven't written anything for a good eight, maybe 10 years," said Sting, responding to a series of questions posed by Tony Award-winning producer Jeffrey Seller, who hosted the event. "Because my mantra has always been that 'If you don't have anything to say, shut up.'"

Sting found his inspiration for "The Last Ship" from his childhood growing up in Wallsend, England, which was at one time a major shipbuilding city. Instead of writing just a series of three-minute pop songs, Sting said he wanted to write a large-scale narrative to commemorate the vanished community of shipbuilders who were fiercely proud of their work and who lost their identities when the industry shut down.

"As soon as I put pen to paper, these songs started to come out of me like projectile vomiting," joked Sting.

Though Sting has appeared on Broadway as an actor in the 1989 revival of "The Threepenny Opera," this is the first time he's attempted to collaborate on writing a Broadway musical. And he's aware that several other pop stars have crashed and burned in their attempts to tackle Broadway.

But with collaborators like Tony Award-winning playwrights John Logan ("Red") and Brian Yorkey ("Next to Normal") attached to the show, Sting said he felt like he was in good hands. In fact, Sting said his collaborators have forced him to rewrite songs and refashion the musical's antagonist, making him have a "big sulk" when he had to throw out material he liked.

Though Sting is writing the score for "The Last Ship," he won't be appearing in the show. So Seller asked the singer how it will be for him to see other people performing his songs onstage.

"I imagine I'm going to have postpartum depression," Sting joked.

Comments
3
You must be a logged-in member to add comments. Log In | Subscribe
April 12, 2014 posted by markienyc
To the 'Last Ship' team
I'm a Concierge at the Marriott Marquis in New York and I'm making it a personal goal to make The Last Ship a hit (production/sales/creative team get in touch to find out how I can help)! Saw the concert at the Public, flying to see it in Chicago this June for my birthday on the 18th and can't wait for it to come to Broadway!! - Mark Thompson nymarriott@gmail.com . Mark Grayson Thompson .. ..
October 26, 2013 posted by sarah28
Jimmy Nail
Great to see a Jimmy Nail comeback - he is one start that never got arrogant and above their station .....unlike some! Why is today's quote so arrogant!!
October 25, 2013 posted by lorib
Chicago!!
So excited to get to see the show here in Chicago next summer. Really looking forward to it.
Newer comments    1 - 3 of 3    Older comments

Oct 10, 2013
Watch Sting performing 'The Last Ship' on Charlie Rose. An edited version of his interview and another performance will air on Charlie Rose: The Week tomorrow night... 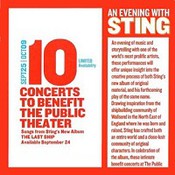 Thank you Sting, for your efforts to bring something so original & personal to the Broadway stage. The album tracks from 'The Last Ship' & the run of shows at the Public Theater make it clear that is shaping up to be something far more than the typical rock star jukebox musical or film adaptations that have cluttered the stage in recent years. The chance to hear the stories that inspired the songs & the rare glimpse into the creative process - seeing these songs performed while the show itself is still in development & while new material is still being created was all such a wonderfully unique opportunity, not only for your fanbase, but for anyone fortunate enough to score a ticket. I also greatly appreciated the visual elements of the concert, from the poles made to look like the masts of a ship & the images of ships being built & the impact of the industry on your hometown. I grew up in the shadows of monolithic grain elevators that to this day stand as reminders of the backbreaking work my ancestors, Irish immigrants on the Buffalo waterfront, did for many years, shortly after arriving in this country. I think that the story that you're hoping to tell with your characters & their desire to build this "last ship," not for investors but for themselves & their humanity, is one that will resonate with audiences well outside of Wallsend. Wishing all involved with the production fair winds & following seas! - Shawn Farrell
For more fan feedback of the Public Theatre concerts read on...