Sting, Idina Menzel and the cast of "Sesame Street" will be among the stars celebrating at Macy's Thanksgiving Day Parade.

Macy's announced Monday that Kiss, Meghan Trainor, Quvenzhane Wallis and Renee Fleming also will be part of the lineup on Nov. 27.

The special will air at 9 a.m. EST on NBC. Macy's says more than 8,000 people will participate in the event.

Philadelphia's Taney Dragons will kick off the march with its star pitcher, 13-year-old Mo'ne Davis.

The cast of the "Today" show will host the three-hour broadcast of the 88th annual Macy's Thanksgiving Day Parade. 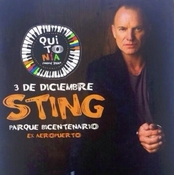 Oct 30, 2014
Sting to perform in Ecuador at the Quitonía Festival 2014...
The 1st Festival of Music ''Quitonía Festival 2014'' will take place in December 2014, from 17:00 to 23:00 and STING will headline the night of December 3rd at the Parque Bicentenario of the capital, Quito. There will also be performances by other national and international artists, who will join Sting at the opening of the event, and will participate in the festival. This important event, organized by the Municipality for all the ''Quiteños'', national citizens and foreigners that visit the capital, awaits the warm reception of the people, during the celebration of the Quito Foundation. Tickets are available from www.ticketshow.com...