Sting Sings, Knowing There's Much at Stake - Promoting ‘The Last Ship' at the Public Theater...

Sting Sings, Knowing There's Much at Stake - Promoting ‘The Last Ship' at the Public Theater...

Sting told a choice anecdote near the close of his concert at the Public Theater on Wednesday night, reaching back to his boyhood in an English shipbuilding town. It was the day of a launching, he recalled, and amid the festive pomp, a Rolls-Royce cruised down the street, bearing the queen. Planted curbside with his mother in his Sunday best, frantically waving a little Union Jack, he was certain that Her Majesty spotted him.

Before the laughter in the room had quite subsided, he led his meticulous ensemble into a reprise of the main theme from "The Last Ship," his new album on Cherrytree/A&M - and, more to the point, his first musical, which is headed to Broadway next fall.

Singing in a chanteylike cadence but in a minor key, his silvery voice taking on a northern brogue, Sting fleshed out a scene much like the one he'd just described. He hailed both the royalty and the rabble, "whatever the station in life you've become." All were gathered there, he sang, for the heaving spectacle, "As a mountain of steel makes its way to the sea."

This was the first of his 10 nights to benefit the Public, in its 260-seat Anspacher Theater. He performed songs from "The Last Ship" with most of the album's core personnel - who hail, as he does, from northeastern England - including the Wilson Family, a fraternity of stentorian folk singers; Julian Sutton, a specialist on melodeon, a button accordion; and the violinists Kathryn and Peter Tickell, siblings who mainly played violin.

Barking some songs in roguish counterpart to Sting, and crooning others in finer-grained harmony, was Jimmy Nail, a veteran actor and singer-songwriter from the same region in England, who'll have a role in the show. Rob Mathes, the evening's musical director, switched among piano, synthesizer and acoustic guitar.

"The Last Ship" contains Sting's first new songs in nearly a decade, and he has said that they came in a surge. The breakthrough was in writing for voices other than his own, though the confessional parallels in "And Yet," an elegant bossa nova about an ambivalent homecoming, are hard to ignore — as is the father-and-son dynamic, weighted by guilt and resentment, in "Dead Man's Boots" and "Language of Birds." A delicate ballad called "August Winds" found him parsing the distinction between public and private demeanors, with all the subtlety of a well-practiced interior monologuist.

Several other songs landed convincingly outside his own scope, including a few sung by Jo Lawry, as a lead character named Meg. "So to Speak" was a touching duet between Meg and a dying priest — sung by Sting, who also sang "Practical Arrangement," a heartbreaking, hangdog entreaty from one of her two rival suitors. That song hadn't met the production's bar for narrative tension, as he ruefully explained, before offering a taste of its replacement, a yearning ballad called "What Say You, Meg?"

"The Last Ship" has ambitions beyond the romantic or filial, so there were also songs of working-class hopes and anxieties, typically set in some jaunty variation on waltz time. "What Have We Got?" was a stout, winning anthem in this vein, bursting with boisterous fatalism. "Ballad of the Great Eastern" was a clunkier fable of industrial hubris.

And "Shipyard" presented a gallery of characters including, as Sting put it, "the self-taught, pompous intellectual of the shipyard, played by me, of course." In that guise, he earned another laugh with the line "I've a preference for the deference of a metaphor." The dream-filled boy that Sting once was, and the privileged artist he became, have that much in common. 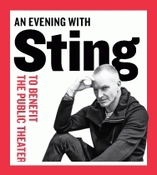 Who will play Sting on Broadway next year? That was the burning question posed - sort of - Wednesday night at the Public Theater, as the pop veteran launched a 10-night run of benefit concerts introducing songs "inspired by" his first musical, The Last Ship, due to arrive on the Main Stem in fall 2014. Billed as An Evening With Sting: The Last Ship, the show placed the international star in the Public's 260-seat Anspacher Theater, where he explained to an audience including fan-club members and lottery winners how he conceived his virgin project as a musical-theater composer/lyricist. Set in a Northeast England, where he grew up, it features as its hero a man who is, like Sting, the son of a shipyard worker, who leaves his small community and remains "very ambivalent about where he comes from..."

Sep 25, 2013
The Public Theater To Offer Free Tickets For An Evening With Sting...

For the first and only time, Sting will perform songs from his new album, The Last Ship, over 10 concerts to benefit The Public Theater. The Public will offer a limited number of FREE tickets via a lottery system for AN EVENING WITH STING, September 25 through October 9 at 8:00 p.m. Beginning at 5:30 p.m., persons can enter the lottery by filling out an entry card with their name and indicating if they want one or two tickets. If two tickets are requested, both attendees must be present. At 6:00 p.m., the lottery winners’ names will be selected. All winners must be present at the time of the drawing. Entry cards will not be given out before 5:30 p.m. and the winners will be selected via random lottery. A minimum of 10 free tickets will be given out at each performance, excluding the special Sting.com fan club concert on October 2...
Read more
+