Sting Theory - Sting talks to the Financial Times ahead of the opening of Symponicity Tour in Vancouver... 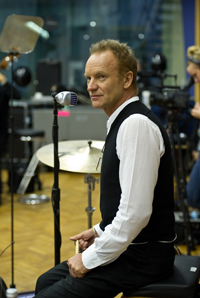 Outside the graffiti-scrawled white walls of Abbey Road studios, Japanese tourists are photographing their friends in Beatles poses on the world's most famous pedestrian crossing.

Inside is a maze of studios. The largest is Studio One, where there is a 45-piece orchestra - young men and women clad mainly in jeans and shirts - as well as a guitarist, percussionist and blonde female vocalist. They are being put through their paces by Steven Mercurio, a wiry, energetic conductor. Tucked behind him, sitting straight-backed on a stool and wordlessly nodding to the opening bars of "Field of Gold", is Sting.

This is the second day of Sting's rehearsals with London's Royal Philharmonic Concert Orchestra before they embark next month on the "Symphonicities" tour (a play on the title of the Police's Synchronicity album). Sting's career as frontman for the Police and as a solo musician has spanned 35 years, earned him 16 Grammies and shifted 100m CDs. He takes a break and shows me into a makeshift office for his management and PR entourage. The 58-year-old, newly shorn of a bushy beard, is, at close quarters, ageless. His trim, athletic physique is shown off in a tight-fitting tank top over a pristine white shirt.

It is easy to have an unfavourable opinion of Sting. He is scoffed at by the press, portrayed as having a Messiah complex and being an eco-hypocrite. And setting pop songs to classical arrangements appears, on paper, to be bloated and pretentious. But the low-key man who sits on the coffee table in front of me seems quietly pleasant and acutely aware of the potential pitfalls of his latest project.

"There's nothing worse than a pop ballad played with a classical orchestra sawing notes, bored out of their minds because [they] are wallpaper to your vanity," he says. Whom does he have in mind? Sting, so named after an adolescent love of yellow and black stripy jumpers, shakes his head. "I'm not going to say. Just about everybody. The right arrangement should challenge the musicians technically."

It was "curiosity" - a word he uses many times to describe the reasons behind his career choices - that led him to collaborate with the orchestra. His role in rehearsals, he says, "is to sift stuff away, what's essential, what's supporting a song; and also supporting my performance." He smirks. "So it's about me." He bursts into laughter.

The orchestra, he says, breathes new life into the songs. "It's interesting to see these songs evolve from when I wrote them 35 years ago in a bedsit singing to my cat." "Roxanne", for example, "was an angry little song about jealousy. Now it sounds romantic. The context alters the emotion."

After 35 years, is he not bored of "Roxanne"? He insists not. "It's my job to sing it every evening with the passion and same sense of discovery as when I wrote it. I always find some [new] little inflection in it." Covers of his work also inspire him - he describes the version of "Roxanne" by hip-hop group the Roots as "wonderful". Though the source of his pleasure is not purely creative. "They pay me every time they play that song," he grins.

Surely delving into his back catalogue for this latest tour is regressive? "It's interesting for me to go back because I want to go forward," he says. I nod vacantly before realising I haven't a clue what he means. "It means I have no idea what is next. So for the last eight years I've been looking back. I did the Renaissance record [Songs from the Labyrinth, 2006] and the folk record [If On a Winter's Night, 2009]. And now I'm looking back into my own repertoire."

His six children (two from his first marriage to actor Frances Tomelty and four with his wife Trudie Styler, an actor and film producer) introduce him to new influences. "The music they play when they're 14 is designed to annoy you. Endless rap, rightwing misogynistic tosh, then you get through to the good stuff."

His eldest son Joe is the lead vocalist in the rock band Fiction Plane and his daughter Coco Sumner is the singer in the pop group I Blame Coco, who recently toured with La Roux ("I hear my own DNA in them and also things they haven't got from me"). Does having a famous father help their careers? "Yes and no. People are curious about them because of me. The scrutiny is potentially negative. But I came from Tyneside, no idea how to get into the business, my dad was a milkman. It balances out.

"I've always said music is its own reward. And they say,'Well it's easy for you to say, Dad.' But it's still the truth. You can be playing to three people in a pub and it's nourishing for your soul."

While Sting paid his dues as a young musician in the 1970s, first in Tyneside, performing around his job as a teacher, and then in London, where he formed the Police with drummer Stewart Copeland and guitarist Andy Summers, his children have a point: Sting's fortune was put at £180m by this year's Sunday Times Rich List. His wealth, he says, comes primarily from touring. "We were very frugal. We never went for the giantism that most rock bands went in for." (Again, he refuses to name names.) "We always brought money home."

The Police reunion tour of 2007-2008 helped to boost his fortune to the tune of $28m, according to Forbes magazine. While financially a success, he describes the reunion as "a mistake psychologically". He says: "It was much more difficult than I imagined. I was supposed to feel nostalgia - I didn't. The audiences loved it - it was like mum and dad got back together again. But I don't think I could do it again."

Flying across the world on tours and to his multiple houses, has drawn criticism for his supposed hypocrisy over green issues. Sting is unabashed. "Yes I have a huge carbon footprint," he says. "But I also offset that by a legally protected rainforest the size of Belgium. If you read the Stern commission on global warming [the 2006 British report on the economics of climate change], the effect we have by flying is tiny compared to chopping down forests."

Does he worry about being portrayed by the press as sanctimonious and pretentious? "The British press are sneery, that's what they do. Occasionally it's your turn to sit in the stocks. It doesn't get to me. I'm British and have the same phlegm." Is he not embarrassed that he will be for ever linked to comments he made 20 years ago about tantric sex sessions? "Not at all; it's funny. People are fascinated by sex, as I am."

While generally the public are "very sweet", he thinks the British have a vexed attitude towards celebrity. "They see you and they panic, they want to show you that you're not famous." He believes celebrity "distorts the mirrors of self-esteem" and feels comfortable in New York because "every street cleaner, taxi driver, cop" sees a celebrity as a walk-on part in their own personal TV show.

Despite the fame and performances in front of thousands, Sting insists he is shy. "If I go out, I like to hide away. I've no intention of being the life and soul or the focus of a party. On stage I have a job."

That job extends to maintaining his physique through yoga (although he attributes "50 per cent" of his motivation to vanity). "You can't do my job fat. I don't want to wear Spanx [body shaping clothes] to go on stage." Though he isn't a puritan: "I drink, I've never smoked anything legal in my life." So he does drugs? He smirks. "Cocaine is reprehensible, what it does to people, what it does to the planet and the societies it's bought from. I've taken shamanic drugs [which can be] close to religious experiences."

While Sting is unlikely to fall prey to the rock star cliché of becoming a bloated cokehead, he also has no interest in being a tortured artist any more (his early creativity he attributes to "anger and alienation" due to an unhappy childhood). "I'd like to be happy and be creative," he says. "I want what comes out of me to be sweet."

Quite what that will be isn't clear. "I'm trying to find out what the next step is," he shrugs.

© The Financial Times by Emma Jacobs

May 28, 2010
'Symphonicity' dates confirmed in Paris and Nantes and second London show added...

We are pleased to confirm three further European dates for Sting, accompanied by the Royal Philharmonic Concert Orchestra, this autumn. The 'Symphonicity' tour will visit Paris (De Bercy) on September 30 and Nantes (Zenith) on October 11. A second night has also been added at the Royal Albert Hall in London on October 2. These Paris and Nantes dates will go on presale to Sting.com members from 10am on June 2 and go on public sale on June 4. There will be a presale for American Express cardholders commencing at 10am on May 31 (from a different hold to the fan club allocation). The current European schedule is as follows. The additional London date has already gone on public sale but the fan club will be having its own post-sale using an allotment of pre-allocated tickets which will commence at 3pm (Legacy members)/4pm (other members) on 1 June. Members will be limited to two tickets in this presale...