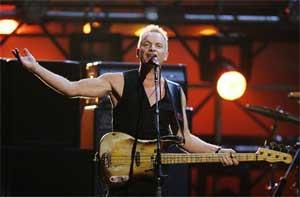 No one on planet Earth was happier than Stewart Copeland on Sunday night. And it showed.

It was probably no accident that the first close-up of the Grammys Sunday night featured Copeland pounding out the beginning of "Roxanne," the smile on his face as wide as could be.

And that's what the Police - Sting, Copeland and guitarist Andy Summers - did Sunday night at the Grammys, and, though painfully short, it worked beautifully. On the eve of launching a tour tied to the 30th anniversary of their hit "Roxanne," they opened the 49th annual Grammys in Los Angeles by playing a solid version of, of course, "Roxanne."

Then, after three glorious minutes that even featured Mr. Serious Sting smiling widely and having fun, we had to watch the rest of the Grammies.

Oh, well. The Police got their plug in for the big summer tour that should dwarf the money-making capabilities of the Pacific Rim nations put together. The band has scheduled a press conference for Monday, at which it is widely rumored that they'll announce dates for a U.S. and European tour.

The trio on Sunday also, somehow, looked like they still belong together. Like maybe it hasn't been more than two decades since they disbanded.

Still, it's early yet. Give Copeland some time to get on Sting's nerves.

But everything was gravy Sunday. They were happy and clearly excited to be playing together. Wearing a sleeveless vest and looking like he's been doing plenty of working out, Sting was energized onstage. And they sounded tight, if not a bit slower than in the '80s, when the band ruled rock. Sting can still hit the high notes, though he did go down an octave on the chorus. There was an unnecessary jam in the middle of the song, but maybe the old boys needed to string the performance out a bit. Perhaps it was Sting's mellow jazz fascination coming through.

We'll give them the benefit of the doubt. Until this summer. But judging how entertaining (not!) the Grammys usually are, the Police should have given their fans a couple more songs.

Feb 7, 2007
View some preview clips of Sting's new release! Special DVD/CD Package February 13 entitled 'The Journey And The Labyrinth: The Music of John Dowland'
Check out some great previews from the DVD now over in the Exclusives section of the site. The DVD is in stores February on Deutsche Grammaphon - Includes Extended Version of Sting's Forthcoming Great Performances PBS Special, Along With Bonus Live Audio CD Featuring Music From His Critically Acclaimed Album, 'Songs From The Labyrinth' - Available for pre-order now!
Read more
+

In an historic GRAMMY moment, the Police (Sting, Stewart Copeland, and Andy Summers) will reunite and perform together for the first time on the GRAMMYs when they open the 49th Annual GRAMMY Awards telecast on Feb. 11, it was announced today by The Recording Academy. With five GRAMMY Awards to their slate of accolades, the Police, one of the most famous bands in the world, create a purely original sound by infusing reggae with pop and rock-- a sound that will be heard 'round the world from the GRAMMY stage. ..