WILL OPEN ON BROADWAY Fall 2014

Life in the English seafaring town of Wallsend has always revolved around the local shipyard, where the hardworking men of this close-knit community construct magnificent vessels with tremendous pride. But Gideon Fletcher dreams of a different future. He sets out to travel the world, leaving his life and his love behind. When Gideon returns home fourteen years later, he finds the shipyard's future in grave danger and his childhood sweetheart engaged to someone else. As the men of Wallsend take their fate into their own hands and build a towering representation of the shared dream that has defined their existence, Gideon realizes that he left behind more than he could have ever imagined.

"The memories at the heart of THE LAST SHIP have occupied my mind for most of my life," said Sting. "I was compelled to tell this story, and I've had the great fortune of collaborating with an enormously talented team."

"I can only produce a show that I fall in love with," said producer Jeffrey Seller. "The moment that I heard 'Shipyard,' which was the first song that Sting wrote for this show, I knew two things: that I was in love and that this extraordinary artist knew exactly how to write a Broadway musical."

Big, bold and hauntingly beautiful, THE LAST SHIP is a portrait of a group of people so bound together by passion and faith that they'll stop at nothing to preserve the only life they've ever known.

Casting, design team members, and details for the Broadway production will be announced at a later date.

On Tuesday, September 24, Sting will release a new album of original material entitled The Last Ship, inspired by the story of the forthcoming musical. In celebration of the album, Sting will perform a series of 10 concerts to benefit The Public Theater in New York City in their intimate, 260-seat Anspacher Theater from September 25 - October 9. A limited number of tickets are still available for purchase at
ticketing.publictheater.org/production/?prod=22099.

Performances of THE LAST SHIP will begin at Chicago's Bank of America Theatre (18 West Monroe Street) on June 10, 2014 for a five-week-only limited engagement through July 13, 2014.

Tickets are available now for groups of 10 or more by calling Broadway In Chicago Group Sales at (312) 977‐1710. THE LAST SHIP will be a part of the Broadway In Chicago 2014 Spring Season. Individual tickets will go on sale at a later date. For more information, visit www.BroadwayInChicago.com.

To download photos of the creative team of THE LAST SHIP:
http://downloads.thehartmangrouppr.com/ncapatastohg/Creative.zip

To view a video of Sting discussing the origins of The Last Ship, visit:
http://www.youtube.com/watch?v=8vCuwE7kg1w.

Or to download the video in HD, visit:
http://downloads.thehartmangrouppr.com/ncapatastohg/Origins.zip.

STING (Score). Sting was born in Newcastle, England before moving to London in 1977 to form The Police with Stewart Copeland and Andy Summers. The band released five albums, earned six Grammy awards, and in 2003 was inducted into The Rock and Roll Hall of Fame. Since 1985, Sting has evolved into one of the world's most distinctive solo artists. His latest album, entitled The Last Ship, is inspired by his childhood memories of the shipbuilding community of Wallsend in the North East of England where he was born and raised. Sting has sold nearly 100 million albums from his combined work with the Police and as a solo artist and has earned an additional 10 Grammy awards, a Golden Globe, an Emmy, and three Oscar nominations.

JOHN LOGAN (Book) John Logan received the Tony, Drama Desk, Outer Critics Circle, and Drama League awards for his play Red, directed by Michael Grandage. This play premiered at the Donmar Warehouse in London and at the Golden Theatre on Broadway. Since then Red has had more than 200 productions across the US and has been presented in over 30 countries. He is also the author of more than a dozen other plays including Never The Sinner and Hauptmann. In 2013, his new play Peter and Alice premiered in London and I'll Eat You Last: A Chat With Sue Mengers opened on Broadway. As a screenwriter, Logan has been three times nominated for the Oscar and has received a Golden Globe, BAFTA and WGA award. His film work includes Skyfall, Hugo, The Aviator, Gladiator, Rango, Coriolanus, Sweeney Todd, The Last Samurai, Any Given Sunday, and RKO 281. He is currently writing the next James Bond film and is in production for "Penny Dreadful," a drama series he created and is producing for Showtime.

BRIAN YORKEY (Book) received the 2010 Pulitzer Prize for Drama, as well as the 2009 Tony Award for Best Score, for Next to Normal. Brian was also nominated for the Tony Award for Best Book of a Musical for Next to Normal, and his work on the show earned him the Outer Critics Circle Award for Best Score. Brian is currently at work on If/Then, a new musical with Next to Normal composer Tom Kitt, director Michael Greif, and producer David Stone, which will open at the National Theatre in Washington, DC, in November 2013, in advance of an opening at the Richard Rodgers Theatre on Broadway in March 2014. He is also working with Tom Kitt on a stage musical adaptation of Tom McCarthy's acclaimed film The Visitor. Brian and Tom are also writing songs for the stage adaptation of the much-loved movie Magic Mike and for Diablo Cody's feature film adaptation of the Sweet Valley High books. Brian's musical film Time After Time is in pre-production at Lionsgate/Summit. Film projects in active development include Score! for Team Downey and Warner Bros., Love Undercover for Pandemonium Films, and Chase for Anonymous Content and Rosenzweig Films. Brian's other theatre credits include Making Tracks, which has played off-Broadway and regionally, the musical adaptation of Ang Lee's The Wedding Banquet and the country musical Play It By Heart. Brian has directed off-Broadway and regionally and for seven years was associate artistic director at Village Theatre in Washington state, one of the nation's leading producers of new musicals. He's a graduate of Columbia University, where he was artistic director of the Varsity Show, an alum of the BMI/Lehman Engel Musical Theatre Workshop and a proud member of the Dramatists Guild and the WGA.

Comments
2
You must be a logged-in member to add comments. Log In | Subscribe
September 20, 2013 posted by doremi
Félicitations!
All the best, and Blessings!
September 19, 2013 posted by honeypot
karen301
Good Luck with (The Last Ship) on Broadway Sting and God Bless.
Newer comments    1 - 2 of 2    Older comments 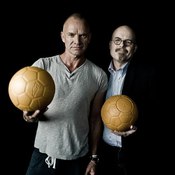 Sep 21, 2013
Today is International Day of Peace...
Today is International Day of Peace – celebrate and help to share the power of play by posting a photo or video to Instagram with a One World Futbol, tagging @oneworldfutbol, and the organization will donate a ball to youth in disadvantaged communities. For details, please visit http://bit.ly/1emBNg6. Here's a photo of Sting with OWFP co-founder Tim Jahnigen, and for more inspiration, check out OWFP's Instagram channel at http://bit.ly/1bfmBQL!
Read more
+