The Police celebrate their 30th anniversary with the release of ''The Police''... In stores in the USA today! 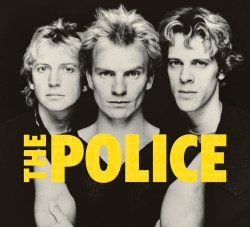 The Police will celebrate the 30th anniversary of their recording debut with their first double-disc CD 'Best of' collection entitled, The Police (A&M/UMe), to be released in the US on June 5, 2007 and internationally on June 11, 2007. The 28 songs bring together the biggest hits from the band's five original studio albums and includes their very first single, 1977's 'Fall Out'.

From that rarity to one of the most-remembered and most performed rock ballads of the '80s, 1983's 'Every Breath You Take', The Police spans the group's six-year journey from sweaty clubs to sold-out stadiums - establishing them as one of the definitive and most popular rock groups in the world.

Playing with the raw energy of a punk band, the improvisational instincts of a jazz trio, and the infectious spirit of reggae, singer-bassist Sting, guitarist Andy Summers and drummer Stewart Copeland were indisputably the most adventurous ambassadors of the genre then known as New Wave. Following 'Fall Out', The Police released their debut album 'Outlandos d'Amour' in 1978. The first single, 'Roxanne' reached the Top 40 and the album, featuring 'So Lonely', 'Next To You', 'Hole In My Life', 'Truth Hits Everybody' and 'Can't Stand Losing You', was Top 30 in the U.S. (Top 10 U.K.).

'Zenyatta Mondatta' proved to be the band's U.S. breakthrough. Released in 1980, the album hit the US Top 10 (#1 U.K.) with two Top 10 singles including the Grammy-winning track 'Don't Stand So Close To Me' and 'De Do Do Do, De Da Da Da', both of which were UK chart topping singles. Also featured on The Police are 'Driven To Tears', 'Canary In A Coalmine' and 'Voices Inside My Head'.

A year later, The Police returned with the eight times platinum, 'Synchronicity', which reached #1 everywhere, spending a phenomenal 17 weeks atop the U.S charts. The lead single 'Every Breath You Take' was #1 for eight weeks & reached Gold status, while Sting won Song of the Year and The Police won Best Pop Performance by a Duo or Group with Vocal at the Grammy Awards of 1984 for 'Every Breath You Take'. 'Wrapped Around Your Finger' and 'King Of Pain' also charted Top 10 and 'Synchronicity II' hit Top 20... The Police also includes the 'Synchronicity' album's 'Walking In Your Footsteps', 'Tea In The Sahara' and 'Murder By Numbers'.

Now, 30 years after the group's first recording - and as the band announced opening the Grammys - "We are The Police, and we are back!"

1 De Do Do Do, De Da Da Da
2 Voices Inside My Head
3 Invisible Sun
4 Every Little Thing She Does Is Magic
5 Spirits In The Material World
6 Demolition Man
7 Every Breath You Take
8 Synchronicity I
9 Wrapped Around Your Finger
10 Walking In Your Footsteps
11 Synchronicity II
12 King Of Pain
13 Murder By Numbers
14 Tea In The Sahara

The Police - A Fragile Truce: It's the reunion Sting swore would never happen. What brought the Police together again, and how long can it last? The music is lean and gleaming, an instantly familiar fury of hyper-reggae drive and hit-record choruses. The Police are rehearsing for their first tour in twenty-three years in a gymnasium in Vancouver. Opening night is a week away, in a local arena. But the Police sound better then ready, tight and implausibly fresh - as long as they keep playing...