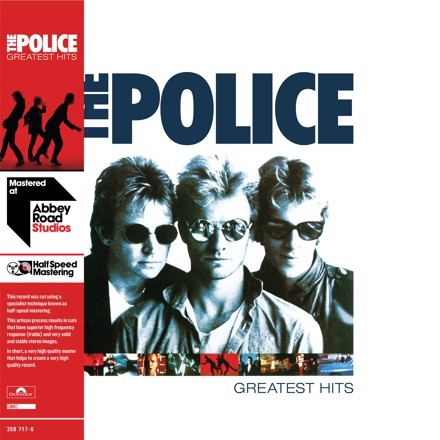 Released 15 April 2022 - The Police - Greatest Hits is being reissued on vinyl in celebration of the 30th anniversary of the original release. Remastered at Abbey Road and cut at ‘half-speed’ for ultimate sound quality, the set contains two heavyweight black LPs with expanded artwork and packaging in a bespoke gatefold sleeve which enhances the original artwork.

A multi-platinum selling global smash on CD, it had a limited vinyl release upon its original release in 1992 which has long been out of print resulting in the original vinyl copies becoming highly sought after by fans. This collection is a perfect introduction to The Police for new admirers, original fans and vinyl collectors alike. It is available to pre-order now from https://ThePolice.lnk.to/TheGreatestHits .

This is the definitive compilation of the band - featuring 16 tracks, 14 UK top-20 hits and five UK number one singles – ‘Message In A Bottle’, ‘Walking On The Moon’, ‘Don’t Stand So Close To Me’, ‘Every Little Thing She Does Is Magic’ and ‘Every Breath You Take’.

The Police are one of the best-selling bands of all time, having sold over 75 million records worldwide. A dynamic three-piece comprising Sting (lead vocals, bass guitar), Andy Summers (guitar) and Stewart Copeland (drums, percussion), the trio is one of the most iconic bands to emerge from the original British ‘new wave’ of the late 1970s.

They became a global touring phenomenon throughout the early 1980s and are a multi-award winning group with two Brit Awards, six Grammys and an MTV Video Music Award to date. In 2003, the band was inducted into the Rock and Roll Hall of Fame.

Recording only five studio albums (four of which made Rolling Stone's list of the 500 Greatest Albums of All Time), the band also produced an extraordinary number of commercial successes and critically-acclaimed hit singles and their astonishing musical range and skilful musicianship, paired with Sting’s astute lyrics, successfully mixed punk, reggae, jazz and rock influences into a melting pot of ingenious songs that still stand the test of time today.

Sting’s latest album, “The Bridge,” is available now. He is slated to continue his “My Songs” world tour in March 2022, including six sold-out shows at The London Palladium from April 15 - 21, plus concerts in Europe and North America, and will resume his Las Vegas residency at The Colosseum at Caesars Palace in June.

Andy Summers will be touring his one man multi-media music show in Germany, France and Benelux in October 2022 and his latest photo exhibition from July onwards.

Stewart Copeland will be performing his ‘Police Deranged’ show, with orchestra, in North America and Europe, and also premiering his opera "Witches Seed" in Italy in July.

Disc One / Side B
Walking On The Moon
The Bed's Too Big Without You
Don't Stand So Close To Me
De Do Do Do, De Da Da Da

Due to ongoing health restrictions, Sting’s My Songs performances currently scheduled between March 5 through March 21 will be rescheduled to fall 2022. Tickets previously purchased will be honored for the rescheduled dates listed below. For any further ticket inquiries, fans are advised to reach out to point of purchase. *Fans holding tickets for shows currently listed as “To Be Confirmed” should hold onto their tickets pending additional information.

We are delighted to confirm three additional shows on Sting's My Songs tour this May in Florida on 20, 21 and 22 May with shows in Jacksonville, Tampa and Hollywood respectively. The Sting.com presale for these shows will commence on Tuesday 15 February at 10am ET through to Thursday, 17 February at 5pm ET. Tickets go on public sale on Friday, 18 February at 10am ET. For 2022 dates confirmed so far visit www.sting.com/tour.