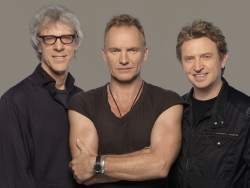 The reunion of rock trio The Police for their first concerts in more than 20 years was named the top grossing and top ticket selling tour of 2007 on Thursday at the 4th annual Billboard Touring Awards.

Singer/bass player Sting, drummer Stewart Copeland and guitarist Andy Summers began the tour in May and it is due to end early next year, after traveling through North America, Europe, Latin America, Japan, Australia and New Zealand.

According to Billboard data up to September 30, The Police have so far grossed more than 1 million from 53 shows seen by more than 1.5 million people.

Arthur Fogel, chairman of music for concert touring company Live Nation Inc who produced The Police tour, told the Billboard Touring Conference that the potential success of the tour was not taken for granted.

"Clearly there was pent-up demand from 20 plus years of them not touring and the fact that they were, when they split up in the mid-80s, ... at their peak and they were very prolific and very successful," he said.

But none of those factors could be taken for granted and that "from day one" it was determined that a high-profile launch was needed to ensure the tour was successful, said Fogel, who has produced 10 of the top 15 money-making tours of all time, according to Billboard.

The Police launched their tour in February at the famed Whisky A Go Go nightclub in West Hollywood with a news conference and mini-concert.

The top package award went to the country tour of Kenny Chesney with Sugarland, Pat Green, Brooks & Dunn, Sara Evans, which grossed more than .2 million from 55 shows seen by more than 1.1 million people.

Former Mouseketeer-turned-pop star Justin Timberlake took out the breakthrough award with his "Futuresex/Loveshow" tour, which grossed more than 5.8 million from 100 shows seen by more than 1.5 million people.

The Download Festival at Donington Castle in Britain was named top festival, and Madison Square Garden in New York City was named the top arena.

Live Nation announced today that The Police concert scheduled for Wednesday, November 14 at the Wachovia Center in Philadelphia has been postponed due to the illness of lead singer Sting. The singer is suffering from the flu and doctors have advised him to rest. A rescheduling announcement will be made as soon as information is available.