THE VERTICAL FARM - Feeding the World in the 21st Century...

The world's first ''Vertical Farms'' are finally cropping up with fully operational prototypes in South Korea and Japan. In Chicago, Milwaukee, Newark, and Seattle vertical farm plans are in production. Written by one of the leading experts in the field, Dr. Dickson Despommier's The Vertical Farm serves as this growing industry's blueprint.

THE VERTICAL FARM - Feeding the World in the 21st Century by Dr. Dickson Despommier

Imagine a world where every city has its own local food source grown in the safest way possible, where no drop of water or particle of light is wasted, and where a simple elevator ride can transport you to nature's grocery store – imagine the world of the vertical farm. When Columbia professor Dickson Despommier set out to solve America's food, water, and energy crises, he didn't just think big - he thought up. In The Vertical Farm, he passionately explains the incredible impact of urban agriculture and how it will change the face of this planet for future generations. With this groundbreaking book, ''Despommier has quickly become the central figure in what could be a worldwide revolution'' (Scientific American)

• Grow food 24 hours a day, 365 days a year
• Local production in urban centers greatly reduces greenhouse gas emissions caused during transport, and prevents spoilage
• Protects crops from unpredictable and harmful weather while eliminating the use of pesticides, herbicides or fertilizers, which leads to dangerous agricultural run off
• Self-sustaining vertical farms will reduce dependence on fossil fuels as well as reuse and reduce water consumption (See Chapter 5 for more information)

Now that there are a handful of fully functioning vertical farm prototypes in existence (NuVege in Japan, PlantLab in the Netherlands) compared to just a year ago when there were none, Despommier says that vertical farming has arrived: ''It is no longer just pie in the sky thinking.'' Vertical farms, and the stable environment they provide, can not only help eradicate hunger in famine struck regions such as Somalia, but provide a real alternative to the environmentally destructive Big-Agra business. Like Michael Pollan's The Omnivore's Dilemma and Masanobu Fukuoka's The One-Straw Revolution, Despommier has written an enlightening and inspiring account of the changes needed to make the farming industry as productive and sustainable as possible. Despommier says he's not courting the locavore, organic, or foodie crowds (although they will surely all be interested); rather: ''I want to feed 6.8 billion people, and vertical farms are the answer.''

Praise for The Vertical Farm:

''A world-changing innovation whose time has come. This visionary book provides a blueprint for securing the world's food supply and at the same time solving one of the greatest environmental crises facing us today.'' - Sting

''Nobody has ever dreamed as big as Dr. Dickson Despommier.'' - New York Magazine

Dr. Dickson Despommier spent thirty-eight years as a professor of microbiology and public health in environmental health sciences at Columbia. His work on vertical farms has been featured on such top national media as BBC, French National television, CNN, The Colbert Report, and The Tonight Show, as well as in full-length articles in The New York Times, Time, Scientific American, and The Washington Post. He recently spoke at the TED Conference, Pop!Tech and the World Science Festival and has been invited by the governments of China, India, Mexico, Jordan, Brazil, Canada, and Korea to work on their environmental problems. He has addressed audiences at leading universities, including Harvard and MIT, and has also been invited to speak at the United Nations. He lives in Fort Lee, New Jersey.

To arrange an interview with Dr. Dickson Despommier, please contact Justin Hargett in Picador's publicity department: justin.hargett@picadorusa.com / 646-307-5627
Comments
1
You must be a logged-in member to add comments. Log In | Subscribe
October 13, 2011 posted by stingchronicity
Inspiring!
We have had such a hard time finding a co-op to belong to for fresh organics... now we could apply this concept on a smaller level, even for our own family/neighborhood!! Exciting things ahead!!
Newer comments    1 - 1 of 1    Older comments 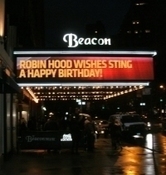 Oct 12, 2011
Inside Sting's Birthday Blowout - Rocker turns 60 with help from Bruce, Gaga, Billy Joel and others...
"Sixty feels comfortable," Sting told the sold-out crowd at New York's Beacon Theatre on October 1st. "I've always felt sort of old." But celebrating the milestone birthday onstage, Sting was positively boyish, ecstatically jamming with a stacked all-star roster of friends and fans including Bruce Springsteen, Billy Joel, Stevie Wonder and Lady Gaga. He has a lot to celebrate this fall: Sting just released 25 Years, a box set focusing on his quarter-century as a solo artist, and this month he kicks off the 32-date Back to Bass tour, playing in theaters with a stripped-down band. "I thought it was a good time to reflect," says Sting. "For me, getting older enriches life. You realize there are a limited number of summers left - or tours, songs, relationships - so you really have to value them..."
Read more
+

Oct 10, 2011
''Endless Sumner - How long is a piece of Sting? About 25 years. A box set plots the creative path of the master of "modern adult popular music..." The WORD review 25 Years...
When The Police agreed to split at the end of their 1984 American tour, all three band members began to create things to fill the space the absence of an enormously successful rock band would leave in their lives. Stewart Copeland began working on a film and solo album called 'The Rhythmatist'. Andy Summers took to writing a long-since-lost screenplay. Sting, being the sort of chap Gordon Sumner was even then, assembled a whole new band made up of exemplary musicians who had played with, among a million others, Miles Davis, Dizzy Gillespie and Weather Report. They decamped to Barbados and made 'Dream Of The Blue Turtles', an almost-jazz record where Sting laid out a template delineated by tasteful instrumentation, musicianly chops and lyrical smartness. This was neither rock nor pop; this music had nothing to do with Elvis, or punk or The Beatles or, indeed, The Police; its eyes were set on the far horizon of a land no one had yet visited, modern adult popular music...
Read more
+