Vinyl release of 'Symphonicities' released in US on Tuesday, 28 September - includes new bonus mix of 'Every Little Thing She Does Is Magic (Bronx Street Fair Mix)'... 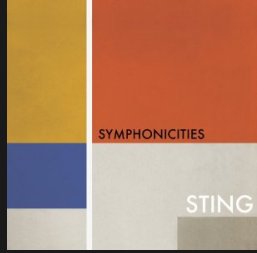 The Vinyl release of 'Symphonicities' is released in US on Tuesday, 28 September - includes new bonus mix of 'Every Little Thing She Does Is Magic (Bronx Street Fair Mix)'...

Check out some of the first reviews of the album here.

First Single, "Every Little Thing She Does Is Magic" Currently Available At All Digital Retailers Including iTunes

Deutsche Grammophon/CherryTree announces the release of Symphonicities, the CD to accompany Sting's highly-acclaimed world tour, which began June 2 in Vancouver, featuring the Royal Philharmonic Concert Orchestra, conducted by Steven Mercurio (Bocelli, Pavarotti). The new studio album, comprised of twelve of Sting's most celebrated songs re-imagined for symphonic arrangement, serves as the ultimate commemoration of the live concert experience. The first single "Every Little Thing She Does Is Magic," is already available at all digital retailers including iTunes.

Additional highlights on the new album include arrangements by David Hartley, Rob Mathes, and Steven Mercurio of fan-favorites culled from The Police songbook such as "Roxanne" and "Next To You," as well as songs from Sting's enduring solo career including "Englishman in New York," "She's Too Good For Me" and "I Hung my Head." Symphonicities is produced by Rob Mathes and Sting, and predominantly mixed by Elliot Scheiner (Steely Dan, Fleetwood Mac). In addition, Claudius Mittendorfer (Interpol, Franz Ferdinand) mixed "She's Too Good for Me" and "Next To You," Alex Venguer (John Legend) mixed "We Work The Black Seam," and Ed Cherney (Bonnie Rait, Bob Dylan) mixed "The Pirate's Bride."

The North American Symphonicity tour has taken the States by storm with sold-out performances in prestigious venues such as Red Rocks in Denver, the Hollywood Bowl in Los Angeles and the Metropolitan Opera House in New York (13 & 14 July). Initial reviews capture the spirit of the project and audience reaction thus far:

"...the real stars of the show were the arrangements: classical twists on classic hits that make Symphonicity a must-see. They were often gorgeous, sometimes playful and at moments deliciously surprising." Globe and Mail

"...an all-star cast of arrangers reworked the songs, and time clearly had been spent making sure the pop musicians and orchestral players onstage would work together to create a genuinely hybrid sound." Los Angeles Times

"Pairing Sting with the orchestra is brilliant synchronicity on multiple levels. He's a consummate showman and a willful storyteller." Denver Post

"...an impressive degree of craft and invention at its best." San Diego Union Tribune

The European tour begins 3 September at Oslo's Konserthus followed by performances on 5 & 6 September at the Royal Theatre in Copenhagen, all of which sold out within minutes of going on sale. On October 5, Sting, accompanied by the Northern Sinfonia Orchestra, will perform a special concert at the Sage Hall in his hometown of Newcastle, England. Further performances have already been announced at other prestigious venues such as London's Royal Albert Hall on October 1 & 2, Teatro Verdi in Florence on October 25, Teatro Arcimboldi in Milan on November 2, and Santa Cecilia in Rome on November 10. Additionally, September will find the tour making stops in Stockholm, Helsinki, Berlin, Cologne, Paris, followed by concerts in Dublin, Nantes, Antwerp, Arnhem, Hamburg, Frankfurt, Stuttgart, Bilbao, Barcelona, Madrid throughout October, with additional performances in Turin and Vienna in November.

Sting will also be joined by a group of accomplished musicians comprised of Dominic Miller (Sting's longtime guitarist), Rhani Krija (Sting's longtime multi-genre percussionist), David Cossin (a multi-percussion specialist in new and experimental music and featured member of the Bang on a Can All-Stars), Jo Lawry (vocalist) and Ira Coleman (bassist).

Sting's interest in collaborating with an orchestra began in 2008 following an invitation to perform with the legendary Chicago Symphony Orchestra, and was furthered by the opportunity to join the Philadelphia Orchestra for a celebration of the 153rd anniversary of the Academy of Music. Reworking selections from his expansive catalog, these performances left an indelible mark on Sting and provided the initial inspiration for his upcoming tour.

"Performing with both the Chicago Symphony Orchestra and Philadelphia Orchestra was truly a highlight of my career," commented Sting. "I am looking forward to the upcoming tour with undisguised glee, having a whole new palate of musical colors to work with and reinventing the songs that have been the staples of my live performances for over thirty years."

Live Nation announced today that the Sting 'Symphonicity' performance on 4th of October, previously scheduled to take place at the MEN, is being relocated to the O2 Apollo Theatre Manchester. Similar to the engagements at the Royal Albert Hall in London and The Sage Gateshead, performing at the O2 Apollo Manchester will provide fans the opportunity to experience Symphonicity in a theatre setting.

Sep 20, 2010
Kyteman at Symphonica in Rosso with Sting...
Trumpeter Colin Benders will perform as a guest in the Gelredome, Arnhem, on 15 and 16 October.
Read more
+