By Sting’s own estimate, his concert Tuesday night was his 26th performance in Dallas since 1979, when the Police made their local debut at the long-gone Palladium.

That’s a lot of larynx-busting versions of “Roxanne.” But this show had a singular feel, since it marked the grand opening of the new Echo Lounge and Music Hall, a 1,000-capacity venue in the Design District that’s a fraction of the size of places where Sting usually plays.

Fronting a seven-piece band, the former Police chief looked decades younger than his 70 years, and his voice sounded vigorous despite a slight roughness around the edges.

As usual, Sting leaned heavily on the classics, with Police songs making up over half of the show. But he’s still writing strong new material, too.

“We’re going to play the hits tonight, but maybe this will be a hit,” he said, before launching into “Rushing Water,” one of two new tracks he played from The Bridge, his 15th and most recent solo album. With its sharp melody and made-for-COVID lyrics about angst and insomnia, “Rushing Water” fit perfectly on the set-list next to “King of Pain.”

Sting recently finished up a monthlong residency at Caesars Palace in Las Vegas, where he’ll return for more shows in June. Yet there was nothing Vegas-y about the way he sculpted some of the oldies into unfamiliar new shapes.

The Echo Lounge and Music Hall, backed by Mark Cuban, holds about 1,000 people. Sting is the biggest act it has drawn in about a dozen shows, and his concert marked the venue's official grand opening.

The Echo Lounge and Music Hall, backed by Mark Cuban, holds about 1,000 people. Sting is the biggest act it has drawn in about a dozen shows, and his concert marked the venue's official grand opening.

“If You Love Somebody Set Them Free” became pliable and jazzy. The melancholy “Englishman in New York” briefly took on a joyous hip-hop beat, while “Roxanne” twisted and whirled into Duke Ellington’s “It Don’t Mean A Thing (If It Ain’t Got That Swing).”

Sting spent most of the show playing his battle-scarred 1957 Fender Precision bass, surrounded by the father-and-son guitar team of Dominic and Rufus Miller and drummer Josh Freese, a veteran of Nine Inch Nails and Guns N’ Roses. But the unsung star of the band was a newer member, harmonica ace Shane Sager, who breathed subtle new flavors into a half dozen songs.

For the encores, the band segued from “Roxanne” into a raucous encore of the Police song “Next To You,” featuring Sting’s 45-year-old son Joe Sumner, who also opened the show. They came back for one last tune, the anti-war ballad “Fragile,” but the delicate moment was ruined as a bartender kept screaming “Last Call!” as Sting tried to sing.

That jarring interruption pointed to the main problem of the Echo Lounge and Music Hall: It’s not particularly music-friendly.

Granted, the acoustics are OK, except for reverberation at the back of the main floor. Most of the sightlines aren’t bad, either, and the 50 or so seats in the center balcony are picture-perfect, albeit pricey, topping $1,000 a seat for Sting.

The only obstructed views are in the side balcony upper platforms, where some fans wound up looking at a video screen instead of the stage.

The biggest drawback is that it’s set up like a nightclub, not a concert venue. With five bars scattered around the hall, patrons loudly ordered drinks, and some chatted through the songs, killing the mood anytime Sting played softer material.

The upscale nightclub vibe also came with upscale prices. The least expensive beer was $13 for a big can of Bud Lite (“Sorry, we don’t carry smaller sizes,” a bartender told me). Water, meanwhile, was $5 (“Sorry, they won’t let us give out water for free”).

Echo Lounge and Music Hall is co-run by Mark Cuban and Live Nation, which also operates House of Blues, a similar-size venue less than a mile away that’s more conducive to listening to music. The Kessler Theater and the Granada Theater are two other smallish spaces in Dallas that are far better designed for music lovers.

Echo Lounge and Music Hall is fine for what it is - the first major nightspot in the growing Design District. But despite having “music” in its name, it’s simply not set up to be an ideal music venue.

Sting, as the kids say, understood the assignment. The multi-platinum pop superstar was on hand Tuesday night for the official “grand opening” of the new Echo Lounge & Music Hall, the venue opened in partnership between Mark Cuban (in attendance Tuesday) and Live Nation that’s been up and running for about five weeks.

All Sting needed to do was look good, play well and not distract the at-capacity crowd from ogling the shiny new venue, tucked off to the side of Interstate 35.

The room, with its vaguely Art Deco decoration and acres of finished concrete, evokes an amalgam of other spaces in town - the hybrid general admission-seated upper tier found at House of Blues or the Factory in Deep Ellum; the plethora of bars situated around the perimeter, à la South Side Ballroom; reasonably decent sound, on par with Trees; an abysmal lack of parking, like … well, just about everywhere in Deep Ellum - and seemed to fare well on its big night.

One thoughtful flourish you don’t see terribly often at Dallas venues: The enormous flat screen TVs mounted near most of the bars upstairs and down were broadcasting the performance as it happened, which helped ameliorate the lack of clear sightlines in much of the venue. If you don’t arrive early and stake out a spot (or happen to snag one of the handful of seats upstairs), you might find yourself hearing more than you see. (That said, this may have just been a “grand opening” fluke, and not standard practice.)

For roughly 95 minutes, the multiple Grammy winner, backed by a crack, seven-piece band, indulged the 1,000 attendees lucky enough to snap up tickets - the concert sold out in an hour - in what had to be his coziest local gig since… probably, when the Super Bowl was in town a decade ago?

Speaking of the Super Bowl, Sting’s last appearance in North Texas came two years ago at the ill-fated Kaaboo spectacle in AT&T Stadium. This performance, like the one before it, is strictly a paycheck gig - who can begrudge a bajillionaire a few more dollars? - but one attended to with verve, good humor, and enough familiar material to send the ceaselessly gabby crowd into ecstatic cheers and awkward dancing more than once.

Theoretically, Sting is touring behind his latest album, My Songs, a collection of what he describes as  “reconstructed” versions of past hits - whatever adjustments he’s made weren’t always readily apparent Tuesday - as well as The Bridge, which he just released in mid-November. He pulled two songs from that album Tuesday (“Rushing Water” and “If It’s Love”), neither of which lingered beyond the final notes fading out.

Sting himself seemed downright chatty throughout, reminiscing about his past trips to Dallas (“I’ve been coming here since 1979; I’ve probably played here 25 times,” he remarked at one point) or pondering what constitutes a hit (an anecdote about lying in bed in a London hotel room in the late ‘70s, only to hear a window cleaner outside, “Whistling my fucking song - that’s a hit!”).

Kicking off with “Message in a Bottle,” Sting reeled off most of the expected back catalog, with one classic tumbling into another (“Walking on the Moon” still bangs). While the setlist was stacked with beloved songs, the 70-year-old singer-songwriter did as most artists of his stature tend to do once they’ve reached a certain phase in their careers, serving it up with slight flourishes or with unexpected, contemporary tweaks.

While the melodies were mostly rendered faithfully, Sting would occasionally slow them slightly (as during “Fields of Gold,” an already stately ballad), or add interpolations (a snippet of Juice WRLD’s “Lucid Dreams” made a cameo during “Shape of My Heart,” closing the loop that began with the late rapper sampling the ‘90s hit).

Still, the moments of genuine surprise and delight were few, which is precisely what The Echo Lounge & Music Hall wanted. A high-gloss evening of familiar songs, delivered to a crowd often more fascinated with documenting the night than experiencing it, performed by an artist who could - and let’s face it, there’s likely a chance he has - do this sort of exclusive gig in his sleep.

Comments
4
You must be a logged-in member to add comments. Log In | Subscribe
December 14, 2022 posted by nieves
Unforgettable Night
I was there a year ago. Dancing and singing behind the mask ... voices, musicians, the blue light of the stage, Sting's comments on western movies, the kisses that Sting threw the public as farewell ... It was my favorite pre-Christmas present.
December 10, 2021 posted by elizabeth_queen
I would love if I can to be there
I'm absolutely sure it will be wonderful. I would so much like to go, but, living in Brazil and without a US visa, I'm losing my hopes of one day seeing the STING Beloved STING, kisses Much love now and forever God bless you always and protect you. Elizabeth from São Paulo city, Brazil 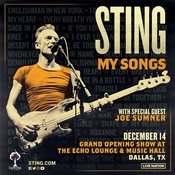