Legendary rocker Sting took a break from stadiums to bring his My Songs tour to the more intimate Filene Center at Wolf Trap on Saturday night (for the second of three sold-out shows), and he put on the perfect summertime show.

Joe Sumner opened the evening with a 20-minute solo acoustic set, followed by The Last Bandoleros, a tight Tex/Mex trio with a great sound and a growing back catalogue. If you get a chance, go see them headlining a show - they're definitely an up-and-coming group, and they set the table perfectly for Sting.

After a brief stage reset, the 7-piece band (2 guitars, keyboards, drums, 2 backup vocalists, and a harmonica player) took their places, and Sting ambled on stage with his bass - and looking like he's 45, not going on 71. In tight jeans and a t-shirt with cutoff sleeves, he looked like he'd been training for a triathlon, and he proceeded to give a clinic on how to put on a rock concert. (It's always a bit of a crapshoot with older performers, but when it comes to Sting, he's still got it.)

With the crowd already on their feet, Sting quickly moved through Message in a Bottle, Englishman In New York, Every Little Thing She Does Is Magic, and All This Time, before pausing to introduce his band. A handful of newer numbers (If It's Love, For Her Love, and Rushing Water) followed, and then the show settled in for a buffet of Sting (and Police) favorites (with featured moments for various members of the band): Brand New Day, Shape Of My Heart, If I Ever Lose My Faith in You, Fields Of Gold, Heavy Cloud No Rain, Walking on the Moon, So Lonely, Desert Rose, King of Pain (with Joe Sumner joining him on stage for a nice father and son moment), and Every Breath You Take, with few pauses.

The staging was spare - a basic lighting set up, a little bit of fog, and a perfunctory video wall that seemed to have been assembled from stock film clips (in many cases), and the Filene Center's two decent sized video screens on either side of the stage. But let's face it: Sting doesn't need special effects - he is the show. The entire production was "lean, mean, and clean" - bare bones rock and roll, delivered flawlessly and (thanks to the sound techs), at just the right level. It's a slick and polished show - almost too polished, at times - from the moment he took the stage, Sting never put down his bass (or handed it to a roadie for tuning, which was pretty impressive), but it would have been nice to see him do a few numbers (Fields of Gold being the most obvious choice) on acoustic guitar, with more minimal backing from the band. (It would have been amazing with just Sting, his 18-year old harmonica player, another acoustic guitar and perhaps keyboards.) For a tour titled "My Songs" and a performer who plays so many instruments, it was a bit one dimensional.

He closed the show with Roxanne and Fragile, a perfect end to a perfect summer evening. 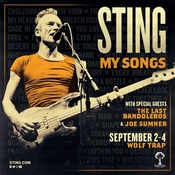