Sting’s Still Got It: Wows Crowd On Bangor Waterfront...

Full disclosure; I expected Sunday night's Sting show at the Maine Savings Amphitheater to be cool, but not necessarily extraordinary. I was pleasantly surprized and entirely mistaken by the end of the show.

As we walked up to the ticket booth, the crowd was definitely a more mellow one than last weekend's Aerosmith crowd, that's for sure. Conditions could not have been more pleasant.

The audience was a mix of folks in their 40s through 70s, with a handful of kids peppered in here and there. And they were pretty subdued to start.

The opener for the show was none other than Sting's own son, Joe Sumner. Sumner came out with only a guitar and a drum track, but that's all he needed to entertain the crowd, as his voice was fantastic and his songs charming.

Resembling his famous father at times, Sumner definitely held his own on his own, with a pretty straight forward performance, accented by a pair of glittery high-tops and a bed-time song called "Jellybean" which he said he used to sing to his kids to get them to sleep, but it never worked.

Samantha and Shelby from Hermon, who had come to see Sting, were very impressed with Sumner's singing.

After a brief intermission, and without a whole lot of fanfare, Sting took the stage with effortless cool, launching right into a recognizable "Message In A Bottle" from his time as the frontman of The Police.

The crowd ate it up, as he transitioned immediately into his own hit "Englishman in New York"... ...and then again as he started up "Every Little Thing She Does Is Magic", another Police hit.

He stopped down after that to greet the crowd. "It's been a little while, Bangor. (Yes, he pronounced it correctly!) You've changed. The last time we were here you were in a field and a train went by for what seemed like 5 minutes."

He looks like time has stopped for him, and not once did the 70-year-old seem winded or skip a beat. He was toned, relaxed, and in command of the stage, playing his bass the entire time.

Sting performed some of his "new" songs, including "If It's Love", "For Her Love" and "Rushing Water" before launching into "If I Ever Lose My Faith" to the crowd's delight.

He introduced his band, which consisted of "his right-hand man for over 30 years" Dominic Miller, and then went on to joke that as an insurance policy, he had hired Miller's eldest son, Rufus, as another guitar player for the band.

Also joining him on stage was Zach Jones on the drums, Kevon Webster on the keyboard, and vocalists Melissa Musique and Gene Noble.

He went on to perform his hits "Fields of Gold" and "Spirits In The Material World" before bringing up a musician he said is the son of his best friend, 18-year-old harmonica phenom Shane Sagar, who killed harmonica part made famous by Stevie Wonder in "Brand New Day."

He brought out vocalists Gene Noble for a cool interlude on an updated version of "Shape Of My Heart" which featured a sample of "Ludic Dreams" by Juice WRLD.

And then he brought Musique up for a soulful rendition of "Heavy Clouds No Rain."

Hitting all the notes and never once appearing to break a sweat, Sting continued on to play "Walking On The Moon" and a fun reggae mix of "So Lonely" and "No Woman, No Cry" and "Desert Rose, which really showcased just how good his voice still sounds.

Sting brought his son, Joe, back out on stage with him to perform a duet of his hit "King Of Pain".

To see the father and son standing next to each other singing, it was hard to tell who was older!

Sumner stayed on stage with his dad, joining the backing vocalists for "Every Breath You Take" and then the "Roxanne."

Sting ended the evening, as he says he always likes to end his shows, "with a quiet song that will make you think."

He traded his bass for a guitar and did a beautiful rendition of his song "Fragile."

And that was all he wrote. No encore, but I don't think anyone walked away feeling slighted. He rocked the stage from beginning to end, with ease, charisma, and an amazing sense of calm and cool.

He's set to take the stage next in Canada before returning to the U.S. to play a couple of shows in Pennsylvania and then Vegas.

Comments
1
You must be a logged-in member to add comments. Log In | Subscribe
April 01, 2022 posted by SunOwlLady61
Ms. Cora
I'm looking forward to seeing Sting again, now that I'm 61! I last saw him on my 28th birthday in Portland, Maine, in 1988. But the real kicker? I became a Police fan from the moment I first heard "Roxanne" on the radio, and I was 19! 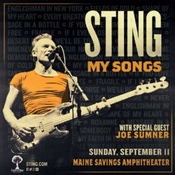