“I don’t know what you want Abu Dhabi!” Sting called out to an enrapt audience as he returned to the stage for his encore. It was a fun moment, given what had just transpired.

He strutted on to the stage of a packed Etihad Arena to rapturous applause for his first performance in the capital in 10 years as part of his My Songs Tour.

The show was one filled with his greatest hits, remastered, rerecorded and released in 2019 as the 14th album of the same name.

The crowd welcomed him back warmly as he broke into the first bars of his classic 1979 Police track Message in a Bottle. Clapping along to the song's infectious reggae riffs and chanting those famous lines of “Sending Out an SOS,” it was clear the audience would be in for a real treat.

Next came Englishman in New York, one of Sting’s first tracks released as a solo artist in 1987, then another Police hit, 1981’s Every Little Thing She Does Is Magic, all of which kept the crowd hyped.

But Sting was the master of pacing, simmering things with two downbeat tracks, If It’s Love and Rushing Water, from his latest album, 2021’s The Bridge. He took us on a journey through his 1993 album Ten Summoner’s Tales, presenting us with a thoughtful mix of its highlights, though the jazzy beats of Seven Days were sadly absent.

Fields of Gold, however, shone. His unmistakable husky vocals front and centre, and on point, he lovingly dedicated the wonderfully poetic and emotional track to his “beautiful wife”.

Two more heart-warming moments followed. The first was when Sting introduced his harmonica player, Shane Sager, who jokingly told the crowd he’d been playing the instrument for “about a month” before breaking into the spellbinding solo from 1999’s Brand New Day, played in the original version by Stevie Wonder. It was a powerful performance, proving that while Sager had some big shoes to fill, he had the deft to do so brilliantly.

The next came when his backing singer, Gene Noble, took centre stage with Sting to sing verses of the 1993 track Shape of My Heart. It was achingly beautiful.

Sting’s stroll through the ‘90s gradually built to another crescendo as he launched into more early Police classics, 1979’s Walking on the Moon and 1978’s So Lonely, during which he called out “Abu Dhabi!” as part of the lyrics, hyping up the crowd for what was to come next — the lilting Desert Rose.

Recorded with Algerian Rai artist Cheb Mami, it was the song that, not surprisingly, really struck a chord. The audience had waited for it patiently, and when its alluring opening bars finally rang out, it whipped the crowd to fever pitch.

Joe Sumner, Sting’s son, who delivered a charming set as the opening act and sounds remarkably like his father, made a reappearance for a heartfelt duet. He and his dad sang the 1983 Police track King of Pain, before the set closed with the 1983 hit Every Breath You Take, every word chanted by an enthralled audience.

Fierce calls for an encore brought Sting back on to the stage for a performance of the much-anticipated 1978 hit Roxanne, the arena bathed in a crimson glow as he belted out the blistering “Put on the Red Light” chorus. A fun call and response of “Roxanne, oh” followed, bringing the show to Sting’s final farewell — a heart-felt Fragile (1988). Demonstrating his Spanish guitar prowess, he captivated the crowd and left me smiling, satisfied that he’d covered almost every decade of his near-half-century-long career in an hour and a half.

Sting delivered a brilliant set of 17 time-honoured tracks. It’s been a tremendous 46-year career and counting for the artist, and all because he knows exactly what we want.

(c) The National by Melanie Smith

Comments
2
You must be a logged-in member to add comments. Log In | Subscribe
September 20, 2022 posted by zimady
Sting.com pre-sale
The news article on Sting.com announcing this states "The Sting.com presale will commence on 20 September at 10am and run through till 22 September at 5pm." Where does one actually purchase these pre-sale tickets? I see the code, but can't see where to use it.
September 19, 2022 posted by Luiscon3
presale
as a fan club member, where cna I get the presale code for the Abu Dhabi concert?
Newer comments    1 - 2 of 2    Older comments 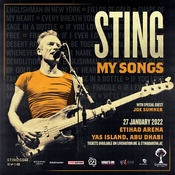