On Sunday, 9th December at 3 PM, a large original Aubusson tapestry, designed by Czech artist Petr Sís, and woven by master weavers in Aubusson, France, will be unveiled at a special ceremony at Václav Havel Airport Prague.

This art work is devoted to the memory and legacy of Václav Havel. It was conceived by Art for Amnesty founder Bill Shipsey on behalf of Amnesty International and supported by five world famous musicians– Bono, The Edge, Peter Gabriel, Sting and Yoko Ono Lennon. The tapestry, measuring 5 x 4.25 meters, has been donated to the Dagmar and Václav Havel Foundation and will be displayed in Terminal 2 at the recently renamed Václav Havel Airport Prague.

Bill Shipsey, founder of Art for Amnesty, and initiator of the project, stated: “This magnificent Peter Sís designed tapestry is a permanent memorial and reminder of the central role played by Václav Havel in restoring, promoting and protecting human rights in Europe and all over the world.”

President Havel was ‘adopted’ by Amnesty International as a “prisoner of conscience” when he was imprisoned in the 1970s and 1980s. In 2003 he was the first to be awarded the prestigious Amnesty International “Ambassador of Conscience” Award.
The five musicians, all long time supporters of Václav Havel, funded the CZK 1.5 million cost of the tapestry. The gift honours Václav Havel and marks the Czech Government’s timely decision to rename the Airport Prague/Ruzyně as Václav Havel Airport Prague.

"Václav Havel was an inspiration to our band - as well as to politicians, poets and all in between - and we were lucky to call him a friend. Sís's tapestry is just one more reason to visit the beautiful city of Prague." - The Edge

"Few writers follow their words as they leave the page and become actions. The cost of public service is great for anyone. For an artist to purposely ignore his own literary voice, to serve all the other voices that can make democracy such a cacophony on occasion, is bewildering to me. But out of that noise, Václav's musical ear found a clear melody to inspire a complex people. His influence is all around us and this work gives an important permanent reminder, fittingly by his countryman Peter Sís and in his home town.” - Bono

"It is an honour for me to be associated with this beautiful tapestry dedicated to the great artist Vaclav Havel. I am particularly pleased that it will be displayed in a city that has a Wall dedicated to John. Both Vaclav and John believed passionately in freedom. The tapestry and the Wall will remain forever as symbols of freedom." – Yoko Ono Lennon

Nov 18, 2012
Virtual Ticket Video - Roxanne Live in Lyon
Sting.com member exclusive: The Back to Bass tour is off to a rocking start! Have you attended any shows yet? If not, here's a taste of what you can look forward to! Check out this video of Sting and the band performing "Roxanne" live in Lyon, France.
Read more
+ 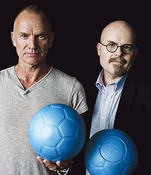 Nov 15, 2012
How Tim Jahnigen and Sting helped develop an indestructible ball for the beautiful game...
Sometimes a football is more than just a ball. Sometimes, it's a lifesaver. Tim Jahnigen has always followed his heart, whether as a carpenter, a chef, a lyricist or now as an entrepreneur. So in 2006, when he saw a documentary about children in Darfur who found solace playing football with balls made out of garbage and string, he was inspired to do something about it. The children, he learned, used trash because the balls donated by relief agencies and sporting goods companies quickly ripped or deflated on the rocky dirt that doubled as football fields. Kicking a ball around provided such joy in otherwise stressful and trying conditions that the children would play with practically anything that approximated a ball...
Read more
+