Manchester Evening News: The Police are still an arresting act... 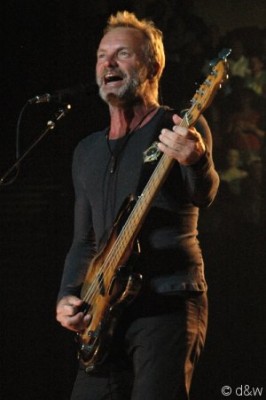 Old Bill? Maybe, but The Police are still an arresting act... Three men with 176 years between them, The Police may now be better called the Old Bill. But the years fell away as they played for the first of two 18,000 strong crowds in Manchester last night. Rangey and live, Sting looks better than any 56-year-old man has a right to, even with his grizzled beard. Drummer Stewart Copeland, aged 55, still has the demonic energy of the Duracell bunny. And Andy Summers, at 65, is still one of the most intelligent, song-shaping guitarists in rock. There were jazzy excursions to flesh out the set, but the essence of it was muscular, rhythmically complex chestnuts as 'Message in a Bottle', 'Walking on the Moon' and 'Don't Stand So Close To Me. You can't fault the Police's style: 24-years-ago they split up at the very height of their commercial power amid group dynamics so sour they even ran to backstage fisticuffs. Returning to the fray last year they have played a world tour to 2.5 million people. After their final UK gig at the Hard Rock Calling event in Hyde Park, London, on June 29, they play together for the last time in New York in August with no chance, they say, of a further reunion. As elegant post scripts to the careers of British rock aristocracy go, it's right up there with the Led Zeppelin and Cream reunions. Rearranged from last October because of Sting's throat infection these gigs offered Manchester fans something close to The Police's swan song. We have been used to seeing Sting himself back here over the years with bigger bands offering more sophisticated dalliances with the music of other continents. But the appeal of The Police's songbook plus the unique interplay of the rock trio make this the concept in which we want to enjoy the man and his music.

Without this reunion there may have been a whole generation who thought of Sting only as a yoga-loving, rain-forest saving practitioner of tantric sex, who did a bit of Elizabethan lute playing on the side.

Why do The Police matter? For a start, the songs endure. Secondly, last night proved that they are still capable of delivering.

And the ticket sales prove that, like the recently reunited Genesis and the long-enduring Rolling Stones, The Police are one of the rare British bands to have been popular right around the world.

Playing their one of their final UK appearances as their reunion tour comes to an end - the band only have a handful of shows remaining - Sting, Andy Summers and Stewart Copeland played a set that show cased their full career. Heralding their arrival onstage with a giant gong, the trio launched into 'Message In A Bottle' before one of the biggest crowds of the weekend...