NME: The Police close Isle Of Wight Festival 2008 - Trio play one of their last ever gigs on the island... 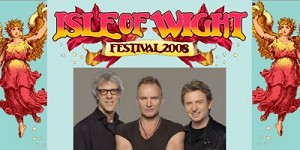 The Police close Isle Of Wight Festival 2008 - Trio play one of their last ever gigs on the island...

The Police have closed the final night of the Isle Of Wight Festival 2008 this evening (June 15).

Playing their one of their final UK appearances as their reunion tour comes to an end - the band only have a handful of shows remaining - Sting, Andy Summers and Stewart Copeland played a set that show cased their full career.

Heralding their arrival onstage with a giant gong, the trio launched into 'Message In A Bottle' before one of the biggest crowds of the weekend.

Playing extended versions of classics including 'Walking On The Moon', 'Every Little Thing She Does Is Magic' and 'Driven To Tears', a bearded Sting revealed he had attended the festival once before.

Later on he asked the audience "are you going to sing?" ensuring the band got one of the loudest sing-a-longs of the weekend throughout their set.

Having wrapped their set up with 'Can't Stand Losing You', the trio returned to close the festival with an encore that included 'Roxanne' and 'Every Breath You Take'.

'Message In A Bottle'
'Walking On The Moon'
'Demolition Man'
'Voices' / 'When The World...'
'Don't Stand So Close'
'Driven To Tears'
'Hole In My Life'
'Every Little Thing She Does Is Magic'
'Wrapped Around Your Finger'
'De DoDoDo De DaDaDaDa'
'Invisible Sun'
'Can't Stand Losing You'
'Roxanne'
'King Of Pain'
'So Lonely'
'Every Breath You Take'
'Next To You'

Advance Tickets for Police Fan Club Members will be available Monday, June 9th at 10AM ET through Friday, June 13 at 10PM ET. PBS has made sure The Police fan club has the opportunity to join PBS members at this special show. For details of advance access for fan club members click here...

Jun 6, 2008
The Police Announce Final Concert of their Reunion Tour to be Held at Madison Square Garden August 7...

Today, The Police, in conjunction with New York public television stations Thirteen/WNET and WLIW21, have announced that after fourteen months of a record-breaking tour, their much anticipated final concert, will take place on Thursday, August 7, 2008, at Madison Square Garden, featuring special guests the B-52's...