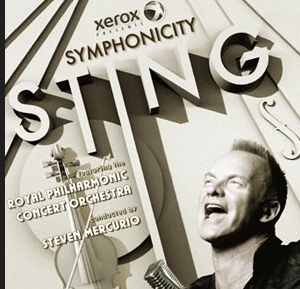 We are pleased to announce Sting, accompanied by the Royal Philharmonic Concert Orchestra as conducted by Maestro Steven Mercurio, has added dates at Dublin's O2 Arena on October 7 and a second night at Copenhagen's Royal Theatre on September 6.

May 30, 2010
Sting Theory - Sting talks to the Financial Times ahead of the opening of Symponicity Tour in Vancouver...

Outside the graffiti-scrawled white walls of Abbey Road studios, Japanese tourists are photographing their friends in Beatles poses on the world's most famous pedestrian crossing. Inside is a maze of studios. The largest is Studio One, where there is a 45-piece orchestra - young men and women clad mainly in jeans and shirts - as well as a guitarist, percussionist and blonde female vocalist. They are being put through their paces by Steven Mercurio, a wiry, energetic conductor. Tucked behind him, sitting straight-backed on a stool and wordlessly nodding to the opening bars of "Field of Gold", is Sting...