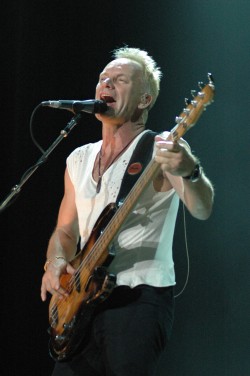 Some fans that gathered at Charlotte Bobcats Arena Thursday to see the Police's reunion tour had waited most of their lives to see the power rock trio live.

When she was 13, Charlotte-native Kym Motley and her junior high boyfriend had tickets for the band's Greensboro show. It should have been her first concert, she recalled, but the group broke up. Over two decades later she watched with 15,000 other hungry fans as drummer Stewart Copeland, Sting and Andy Summers took the stage to the sounds of 'Message in a Bottle'.

Fans may have worried about Sting's energy and vocals considering the band canceled Wednesday's show in Philadelphia because he had the flu. Those worries evaporated as he soared through the first of several "aaaaaaooooahs" during the second song, 'Synchronicity II'.

While Sting sings the chorus of 'Don't Stand So Close To Me' as less of a command and more of a request these days, other songs - such as 'Truth Hits Everybody' (which feature Summers' rippling guitar) and 'Every Little Thing She Does Is Magic' - packed as much punch as they did decades ago.

With Copeland playing a percussion contraption of hanging cymbals, bells, tympani and gong, they turned in a world dub-rock version of 'Wrapped Around Your Finger'.

The tension that fuels the group was most apparent during instrumental jams. For instance, when the reggae-rocker 'Can't Stand Losing You' erupted into a punky jam, complete with shuttering strobes, it was one of the evening's more intense moments.

The Police don't stray far from the genius of its pop singles formula. To close, they left fans with the quintuple treat of 'Roxanne', 'King of Pain', 'So Lonely', a forceful version of 'Every Breath You Take', and a final encore of 'Next to You'.

© The Charlotte Observer by Courtney Devores

The reunion of rock trio The Police for their first concerts in more than 20 years was named the top grossing and top ticket selling tour of 2007 on Thursday at the 4th annual Billboard Touring Awards...