Sting's The Last Ship has long way to travel...

It is possible Sting's musical The Last Ship will never leave the harbour, yet alone dock in a major theatre.

It will certainly never again be seen as I saw it on Friday night at Live Theatre when the actors had the script in their hands.

Even the following night's second try-out performance on Saturday was different, by all accounts.

Having said that, The Last Ship has more going for it than most embryonic musicals.

There's Sting, for one thing. His music - brilliantly played and sung - could transfer easily to the theatre, heavy on mood, rhythm and story. Then there is his powerful support team. Live became a little enclave of Broadway at the weekend with producer Jeffrey Seller, the man behind Rent, and director Joe Mantello, another bigshot, on hand to answer - and ask - questions.

Then there was writer Brian Yorkey who has made several trips to Tyneside to check out the locals and the locations.

Tasked with putting Sting's ideas into a narrative that would work on stage, Yorkey was congratulated by one Geordie audience members for capturing Tyneside perfectly. Yorkey, who has shared a Pulitzer Prize , said he saw parallels with Seattle in the weather and industry departing for the Far East, leaving unemployment in its wake.

Repeatedly Sting stressed there was still a distance to travel. Some characters might go, others might come in. He hoped to write more original music for the show, perhaps removing some of the handful of hits he incorporated - even though they fit the piece well.

A measure of intent was there on stage - 19 actors at the top of their game with long CVs, awards and oodles of experience. You don't assemble a cast like that if you not serious. Emma Williams, Sally Dexter, Declan Bennett, Julian Forsyth - all top calibre people.

Some of the singing on Friday was knock-out, notably from Bennett and Williams. Jimmy Nail's no slouch with a song either and fit the part of Jackie the shipyard foreman to a tee. An acquaintance remarked that the story was a mite sentimental. Maybe. But it was not without heart, the tale of jobless men pursuing a crazy dream. Both cast and audience seemed to buy into it.

Given Live Theatre's presence in New York with the Pitmen Painters, it was interesting to see New York coming to Live. Some fruitful partnerships may well have been forged over the weekend.

Given a prevailing wind, I wouldn't bet against The Last Ship succeeding where many similar ventures have failed over the years. The history of stage musicals may be littered with wrecks but this vessel, like those once launched from the end of Sting's Wallsend street, could one day be a source of local pride.

© The Journal by David Whetstone 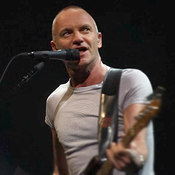 Feb 6, 2012
Superstar Sting wows fans at The Sage Gateshead...
It's thirty years since Sting as singer and bass player with the world's biggest band, The Police, rocked Gateshead Stadium to its foundations. Last night, just down the road, at the Sage, a more reflective, intimate performance from the enigmatic star was equally electrifying. The milkman's son from Wallsend, now exiled in Tuscany, was launching the European leg of his Back to Bass tour, celebrating over 25 years of a successful solo career. He's already toured the States to rave reviews...
Read more
+